You are here: Home / Contributors / Gasquet Stuns Murray in Rome 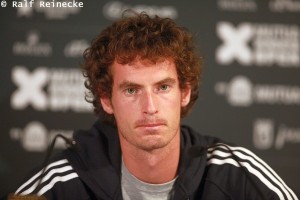 ROME – Matches usually tell two different stories: Andy Murray versus Richard Gasquet was no exception on Thursday at the Internazionali BNL dâ€™Italia. While the Frenchman managed a great victory 6-7(1), 6-3, 6-2, helping him to gear up for the French Open, the Scot showed that he is still struggling on clay. Without coach Ivan Lendl anywhere in sight, Murray played a very confusing match, failing to hold his serve easily most of the time, and spending huge amount of energy battling Gasquet from the baseline.

Murray has an excuse, as his back seemed to bother him throughout the match an issue which he admits he has been dealing with since December, but most of all he has to blame himself for the attitude towards the whole match. He reportedly shouted “I hate this game, I hate it!” on one of the too many occasions where he had to deal with repeatedly having to save break points. Murray never found his inner peace during the match, failed to close the first set while up a break at 5-3. Somehow he won the tiebreak but didn’t manage to bring the momentum to his side and let Gasquet dictate the game.

Gasquet has been playing very well lately, reaching the final in Estoril and now this Murray victory confirms his progress. The fact that coach Riccardo Piatti is now traveling with him 100%, after Ivan Ljubicicâ€™s retirement, it has given Gasquet more confidence and more stability. Friday he will have to play at his best considering that David Ferrer is in great shape. The early start at Noon doesn’t help either as Gasquet didn’t fail to mention his anger about the scheduling during his news conference”.

Big emotions in Rome with Italyâ€™s Andreas Seppi who managed to win another epic match, this time against Stanislas Wawrinka, saving six match points and closing Â the match 6-7(1), 7-6(6), 7-6(6) after three hours and 20 minutes. The Italian will now face Roger Federer who took out Juan Carlos Ferrero 6-2, 5-7, 6-1.

Another surprise was avoided on Thursday when Novak Djokovic managed to come back from a set down against Juan Monaco 4-6, 6-2, 6-3. The Argentinian showed that he has fully recovered from the Monte Carlo injury and he will be a serious threat in the Roland Garros. Rafael Nadal had no problem whatsoever in dismissing Marcel Granollers with a double 6-1 and David Ferrer prevented Gilles Simon from winning his first set ever on clay against him when he secured the second set tiebreak (6-0, 7-6). Tomas Berdych beat Nicolas Almagro 7-6, 6-3. There was an incident during a match at the Australian Open where the Spaniard involuntarily hit the Czech while volleying at the net. Yet the funniest episode involved the man who watered the court at the end of the set and an unlucky linesman who was soaked during the process.

In the night session Juan Martin Del Potro didn’t put much effort in the match he lost 6-4, 6-1 to Jo-Wilfried Tsonga after having been up a break in the first set. Del Potro appeared to be dealing with knee pain. Â The Argentinian didn’t appreciate the humidity and the match went quickly. Roger Federer struggled a bit to get rid of Juan Carlos Ferrrero but eventually won 6-2, 5-7, 6-1.

In the womenâ€™s draw Petra Kvitova needed three sets to beat Sorana Cirstea 6-2, 5-7, 6-2 although she looked relaxed during the vastly deserted news conference. Venus Williams made a giant leap towards the Olympics with her win against Stosur 6-4, 6-3 and Serena Williams secured a big match against Flavia Pennetta disposing of Anabel Medina Garrigues 6-3, 6-1. The Italian is the last local woman remaining thanks to her stunning performance against Petra Cetkovska 6-0, 6-1. Roland Garros champion Na Li won against Chanelle Scheepers 7-6, 6-2 and will face Dominika Cibulkova who received a walkover on Wednesday Â when Victoria Azarenka withdrew from the tournament with a Â shoulder injury. A solid win for Maria Sharapova who trailed early during the match against Ana Ivanovic, saving set points yet still managed to prevail 7-6, 6-3.

Enrico Maria Riva is in Rome covering the Internazionali BNL Dâ€™Italia for Tennis Panorama News. Follow his twitter updates on @TennisNewsTPN and his personal twitter @EnricoMariaRiva.

Enrico Maria RivaÂ is the tennis columnist for the Italian online newspaper Il Post and also writes for the Matchpoint magazine and for the websites Spaziotennis.com and Thetennisspace.com.