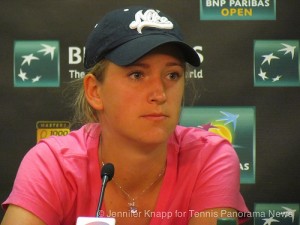 No. 1 seed Victoria Azarenka was five points away from becoming the first top French Open womanâ€™s seed in the Open Era to fall in the first round. Azarenka won 12 of the last 14 games to move into the second round escaping Italyâ€™s Alberta Brianti of Italy 6-7 (6), 6-4, 6-2.

It was a mistake-strewn performance for the World No. 1 who committed 60 unforced errors.

â€œBad days happen,â€ Azarenka said.Â  â€œUnfortunately today I had way more mistakes than I usually do, but, you know, it happens sometimes.â€

â€œThe first match, they’re not easy.Â  But in the end of the day I still won the match, I manage to go through those 60 mistakes and still win the match.Â  I think that’s pretty good statistics.

â€œIf it would be 60 winners and I would lose that match, or win this match this way, I think that would suck a little bit more.â€

The match was a learning experience for Azarenka. â€œBefore maybe I would just give up and go home.Â  I was kind of thinking there was a flight straight to Minsk around 3:00 tomorrow so I could catch that, but I didn’t want to leave too soon.â€

Li spoke to media about her clay court preparation:

“Every court is different.Â  You have to do different exercise as well.Â  In clay court you couldn’t do something like grass court.Â  Of course, this you have to slide on the court, right?Â  It’s clay court.

“So you start clay court season, I always do a lot with the footwork, as well.Â  In the clay court you have to use your legs a lot. ”

Li reflected on her return to Paris after winning Roland Garros last year and discussed last week’s devastating loss in the Rome final to Maria Sharapova.

“So I was tell myself, okay, wish you can doing better, because, you know, last week, no, maybe one week ago the final in Rome still killing me.Â  After final I tell everyone don’t talk to me about tennis like three days.Â  I can’t quiet every second.”

US qualifier Lauren Davis upended 30th seed Mona Barthel of Germany 6-1, 6-1. It was the 18-year-oldâ€™s first match win in a major in her third attempt.

â€œI knew what to expect.Â  But I just went out there determined, and I played good.Â  I played well.â€

â€œI had a great year.Â  I played really good, on a high level.Â  I cannot expect that it’s going on forever like this.Â  There is going to be some ups and downs for sure.

â€œOf course I’m a little bit sad about it, but these things happen in life.Â  That’s the way tennis goes.Â  You win; you lose.â€

Davis will meet fellow American Christina McHale in the second round. McHale outlasted Kiki Bertens of the Netherlands 2-6, 6-4, 6-4.