On her match on Friday:

It was fun.Â  It was nice.Â  I thought the crowd was really going to be against me, but they were pretty equal.

So it was nice.Â  I played well, so that was good.

My grandparents gave me a necklace, and it says â€œIn calmness and confidence.â€Â  Every time Iâ€™m like getting really tight or Iâ€™m like, oh, my God, what am I doing, Iâ€™m just like, okay, relax, you can do that.Â  I think of that and it helps me.

On the possibility of becoming one of the higher profiled Americans:

Yeah, Iâ€™m excited, because now Iâ€™m going to have more Twitter followers.Â  Thatâ€™s good.Â  Iâ€™m excited.Â  I mean, itâ€™s always good to be noticed and recognized, you know, for sport.Â  I think being up there with Venus and Serena, I mean, thatâ€™s awesome.Â  You know, Iâ€™m excited.

Iâ€™m happy that Iâ€™m improving and getting better and that I can be there.

On a slow beginning to the year:

Yeah, if you only knew what was happening three and a half weeks ago, I mean, it wasÂ  the only way to go was up.

So my mom came and my aunt came, and that helped me a lot, because I donâ€™t know what was going on.Â  My head wasÂ  I was having brain farts and things werenâ€™t going my way.

I was being 19, and I think now I am being 29.Â  So I think my mom and aunt definitely helped me through the last couple of weeks.

You know, Iâ€™m very grateful for that.

Venus and Serena Williams for inspiration:

Yeah, they definitely inspire.Â  I mean, not only…..race has nothing to do with it, but they inspire everyone to play tennis.Â  Theyâ€™re two of the best tennis players to ever play the game.

How she describes her game:

Aggressive baseliner, looking to a lot of forehands coming in.Â  Iâ€™m not sure.Â  Whoever wins that match wins, and it will be good.Â  Iâ€™m excited.Â  I love playing here. Â I have been playing well, so it should be a match, whoever I play.

Goal?Â  My goal, coming to the French Open, you mean?Â  My goal coming into the French Open was just play hard.Â  I mean, thereâ€™s nothing else you can do.Â  Play hard, fight hard, you know, run every ball down.Â  Winning or losing, really, it didnâ€™t matter because I started playing well and I started getting my confidence back and I was happy with what I was doing.

So I was just like, thereâ€™s …not going to put any pressure on myself.Â  I always feel really comfortable here, and I really like it here.Â  So I was kinda like, I know if I just do the right things that good things will happen. 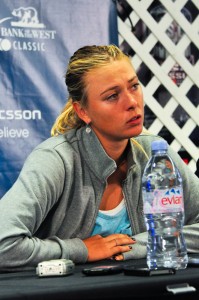 Yeah, it was a pretty long day yesterday.Â  I feel like I warmed up like 20 times for this match (smiling).

Yeah, it was one of those days where you just want to get on the court and then, you know, youâ€™re at the courts all day, and sitting, waiting around, eating, sleeping.Â  Itâ€™s like a good way to put someone into retirement.Â  (Smiling).

It was nice.Â  Nice to get out there today and finish it and get in a third round.

Yeah, I was happy with the way I played today.Â  I never faced my opponent before.Â  Yeah, when she has time, she really goes for her shots.Â  I really wanted to try to get her on the move.Â  I thought I played well, aggressive, moved in when I had to.

Yeah, with every round Iâ€™m going to be playing tougher opponents, and thatâ€™s when you really want to kind of step it up and raise your level.Â  Thatâ€™s what Iâ€™ll try to do in the next round.

Thatâ€™s my opinion about it now.Â  Maybe that can change, but I feel like itâ€™s very… just too much every day to tweet and to write.Â  I write enough texts a day.Â  I canâ€™t even imagine what it would be like if I would tweet constantly.Â  Iâ€™m like, Iâ€™m getting arthritis in my thumbs.Â  I already text so much, itâ€™s embarrassing.

I mean, I think I have already 7 million fans that I have no idea where they came from or who they are, but thank you if youâ€™re live.

Itâ€™s just a nice opportunity I think for the people that really follow you to maybe get a little bit more personal and share things and write things that come from your own voice.Â  I just like to write a lot, so I like to make it fun and very easygoing.Â  Itâ€™s not going to be, you know, like science.

So I have fun with it.Â  I take a lot more pictures now than I used to, because I feel like I want to share it on my Facebook than anywhere else.

I knew he could play very well from the baseline if he had time.Â  I think for bigger guys itâ€™s about, if youâ€™re able to move them around enough and they have to defend time and time again, this is maybe where you can expose some of their weaknesses potentially.

But if theyâ€™re obviously on the attack and they can keep the points short and theyâ€™re all very good, you know, and he showed the same, especially in the first few shots of each point, makes him tough to play.

Itâ€™s a bit tricky when you want to play yourself maybe a clay court match but actually it would be better to play a hard court match, so it was the sliding obviously integrated into that.

So thatâ€™s tricky at times.Â  I thought he did well.Â  Struggled a little bit, but overall obviously Iâ€™m happy I came through.

I saw him play a bit of that match against Clement, obviously, because I knew that was going to end Arnaudâ€™s campaign here at the French, and Iâ€™ve played him many times.Â  So I was trying to watch as much as I could in that match.

So then that gave me a chance to see a bit of him, as well.Â  Because I never really saw him play before.Â  Iâ€™ve seen him around, but itâ€™s a nice game, smooth ball striker and talented, obviously.Â  Otherwise he wouldnâ€™t be coming that far in this tournament.Â  Today he had a convincing tournament, and thatâ€™s exactly what he needed coming into the next round.

Asked if Goffin idolizing Federer give him inspiration:

So itâ€™s a big match obviously for him, and for me, too.Â  It is a fourth round of a Grand Slam, after all, here in Paris where I know the Belgians, they like coming here and supporting their players like Justine and Kim in the past.Â  I expect some Belgian fans to be there, too.

Yeah, itâ€™s gonna be unusual match for me, knowing that now.Â  So thanks for that.Â  (Laughter.)

Bloomberg reported that Federer did not re-sign with agent IMG and that his agent Tony Godsick is no longer with IMG. Federer was asked about re-signing with IMG:

I donâ€™t know.Â  Yeah, maybe.Â  I have no idea.Â  I mean, Iâ€™ve had a good time myself, you know.Â  I was very close with Teddy Forstmann, who unfortunately passed away last year.Â  Obviously I had an emotional attachment to the company that way.Â  He was the one who brought me back really, and so obviously when all of that happened, potentially it wasnâ€™t helpful.

I donâ€™t know at this moment whatâ€™s gonna happen next.

But Iâ€™m relaxed, which is important at this very moment.