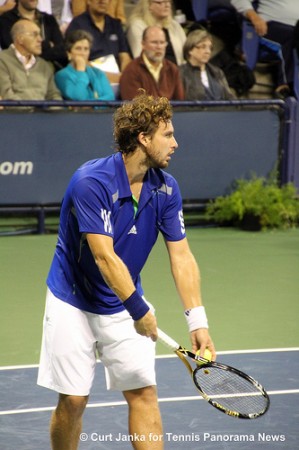 Berdych who was the runner-up to Rafael Nadal at Wimbledon in 2010 had no answer for Gulbisâ€™ serve as the Latvian nailed 30 aces, along with 62 winners.

â€œI was a bit nervous in the beginning of the match, but then the way I served, it opened me up, and starting from second set I just got more relaxed.â€

If you find your formula, if you practice good enough and a lot, the results will comeâ€

“I have been really working hard last month with the new coach, in a new place.Â  I did good preparation here the week before.Â  That’s the result, you know.Â  I really enjoy working with my new coach, Gunther Bresnik.Â  He’s based in Austria.Â  First time I came to him and his academy I asked him to come to Paris and then Wimbledon as well.

“It’s really been good.Â  He really helped me a lot.”

â€œSo we see.Â  I don’t know.Â  I don’t want to make any predictions.Â  Just go match by match.Â  I play well today.Â  Let’s see what happens next round.â€

Gulbis will try to reach the third round when he takes on Jerzy JanowiczÂ of Poland next.