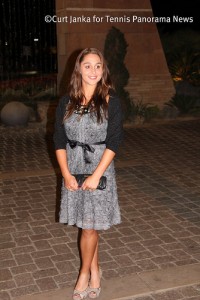 â€œIt was a good match, good tennis, but that doesn’t really help me, Wozniacki said. â€œI lost in the first round.

â€œTomorrow no one will remember how great a match it was, they’ll just remember who won.

â€œYou know, obviously, yeah, it’s not a nice feeling.Â  Those are some of the matches that it’s really great when you win them, but also really sucks when you lose.Â  Especially after having two match points and not taking them.Â  It wasn’t because I played badly.Â  You know, she just went for it, and that’s it.â€

The last time Wozniacki lost in the first round of a major tournament was the 2007 French Open.

“I didn’t think it was a bad match today,” Wozniacki said. “You’re going through periods where you’re lucky, the luck is turning your way, you’re not playing great, but you win the matches anyway.

“You go through periods where it’s just not going your way. You just need to get through this. Hopefully, sooner than later, it will start turning my way.”

Stosur Stunned by Rus at Wimbledon