You are here: Home / Contributors / Murray and Serena Williams Advance 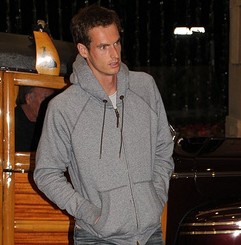 WIMBLEDON – It seems quite surreal, to relegate a Briton, and a four-time Wimbledon champion to â€œin other news,â€ but on such a momentous day on Thursday which produced a major upset of Rafael Nadal, – Andy Murray and Serena Williams could only be the supporting actors.

Williams looked to be in for an easy ride, taking the first set in just twenty minutes, against Hungarian Melinda Czink, on the way to a 6-1, 6-4 victory.

Despite being able to send balls back with equal pace, the first set slipped away from Czink quite quickly, but in the second, she seemed to settle into her rhythm, and certainly did not shy away from matching Williams slug-for-slug from the baseline.

Where Williams really started to hurt her was in coming to the net.Â  Czink did venture closer from time to time but far too infrequently against someone with Williamsâ€™ doubles pedigree.

Where Williams seemed nervous and edgy in her first round, she seemed to be gaining in confidence.

â€œBut I’m just always wanting to be so perfect that sometimes I want to do too much.

â€œSo it’s something to be happy about.â€

Williams will meet Jie Zheng in the third round.

On the flip side of the coin, the battle between the man who would Â serve from the height of a tree, and the Briton who carries the hopes of the home crowd.

Things did not start terribly well, with Murray being broken in the first game, but he settled the nerves of the watching fans by breaking straight back.

From then on, it was a matter of just trying to get the win, in a game where it was going to be difficult to get any rhythm.

Murray said: Any match you just want to try to find a way to win.Â  It’s not always about how you play.

Murray did not have it all his own way and when Karlovic won a tightly contested tiebreak in the second set, it was to Murrayâ€™s credit that he knuckled down and fought back in the third.

He said: â€œAfter losing that tight second set, to get that break at the beginning of the third set was important as well.

Karlovic did seem troubled towards the end of the match after being called on a number of foot-faults, going so far as to criticize the credibility of the tournament.

He said: â€œIt was a little bit outrageous.

â€œIn my whole life, ever since I was eight years old, I didn’t do this many footâ€‘fault[s]â€

â€œOn a Grand Slam, Centre Court, I don’t know what to say.â€

Although to his credit he tried to keep an even head for the rest of the match, even pausing to make a show of moving his leg back for a lines-judge, to the crowdâ€™s amusement.

â€œI was focused on the match.

â€œI didn’t want to get too crazy over it because I would lose it.

â€œSo I was trying to be focused.â€

Karlovic was not sure if he was able to see a review of the alleged foot-faults or take his issues further.

Murray will face Marcos Baghdatis in the third round.

Ros Satar is a British Journalist- an IT Journalist by day, a Sports journalist part-time and her match observations can be found at the Chalkdust Chronicles (chalkdustchronicles.blogspot.com). Follow her on twitter at @rfsatar.