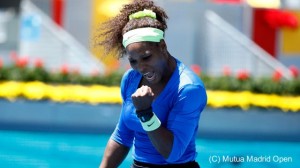 WIMBLEDON – Serena Williams survived a major test on Saturday in the All England Club when she came back past Jie Zheng 6-7, 6-2, 9-7 to move into the round of 16.

Williams said that she had to dig deep to get through the tough match. “Definitely pretty deep,” said Williams. “She was playing really well.  Just have to go out there and do what I could.”

“Oh, it’s a long match, Zheng said, “and also it’s a tough match because she has big serve. I think it’s very difficult against her on the grass court.

“But I think today I play well.  Just few points I have some chances like the final set, first game, I’m 2-‘1 up, and I have the three break points, but I missed, and in the final set 7-All, my serve game is the serve is not so well, yeah.

“But I think it’s great match for me, also.”

Williams set a record for the most number of aces in a women’s match at 23.  “It definitely helped me out today because I wasn’t doing my best on my return like I normally do” Williams said.  “So it’s good to know that I can rely on that.

“The whole match I was able to hold serve I think, so, yeah.”

“You know, just wasn’t making my returns. I hit so many errors off the returns. I was just off.  Usually I’m returning really, really well.

Zheng, although disappointed with the match result, feels the match will give her confidence for the Olympics. “I really want(ed) to win this match,” Zheng added, “because I remember this is my third time against her in the Wimbledon, the Centre Court, so, yeah, I’m looking for what is today I think is very close to win.  So also gave me more confidence for looking for next month, the Olympic Games.”