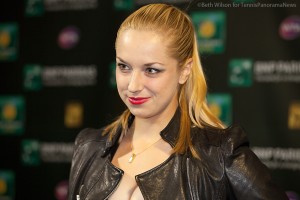 WIMBLEDON -Â  No Wimbledon title for Maria Sharapova this year.Â  The current No. 1 who will lose her top ranking next week was dominated by Germanyâ€™s Sabine Liscki 6-4, 6-3 in a fourth round encounter on Monday.

â€œYeah, certainly had chances,â€ Sharapova said. â€œI didn’t take them.Â  But I think I a lot of the credit goes to my opponent.Â  She played extremely well today and did many things better than I did on this given day.Â  You just have to hand it to her.â€

â€œShe did many things much better than I did today,â€ said the Russian.Â  â€œOf course, could have done things differently, absolutely, but not on this particular day.â€

â€œI felt great,â€ said a beaming Lisicki.Â  â€œI had a great practice yesterday evening and felt good this morning.Â  As soon as I stepped on the court I also felt like I’m playing very well, so, you know, I was feeling very confident â€‘ even though I lost the first game.

â€œI just missed a couple of points here and there, but overall I just felt very good and confident.â€

The German continued: â€œWell, I felt very good even in the start of the first set already.Â  I felt like I’m hitting the balls very clean.Â  I’m doing what I’m supposed to do.Â  When I took the first set, it obviously gives you another lift, more confidence.

â€œWell, I knew as soon as I got the break in the second set, I knew I’m going to take it home.â€

â€œIt feels amazing,â€ said the German. â€œI mean, she won the French Open.Â  Actually, that’s a good omen for me, because I’ve beaten the French Open champion three times here.Â  In ’09 I beat Kuznetsova, last year Na Li, and this year Maria.Â  I guess they shouldn’t be in my part of the draw.â€

â€œI enjoy the sport.Â  I just love playing tennis and I love being out there, especially at my favorite tournament.

â€œSo, you know, I just have fun out there.Â  I mean, I know I missed the shot by a little, but I was going for the right one, so there’s nothing to be mad about.â€

â€œI know that actually maybe her last Wimbledon, but I was going out there and know before the match that I need to play very good to beat her,â€ said Kerber.

â€œI think I do a good job today, so, I mean, I’m very happy to be in the quarters right now.â€

â€œI just had the feeling that there was absolutely nothing I could have done today to have won that match, said Clijsters. You know, I just felt, like, my opponent was better on every level.Â  You know, that’s all I was thinking about.

â€œI won’t be sorry about anything, Clijsters on her impending retirement at the end of the year.Â  â€œI mean, I know that every time that I’ve played here I’ve given my best, and that’s the only thing that I can try.Â  You know, some days it’s good, some days it’s great, and some days it’s not good enough.

â€œSo I don’t think I’ll feel sorry about anything when I leave.â€

Clijsters spoke about her special memories at Wimbledon: It obviously all started I think from when I was a youngster, being at home even before I was a junior watching Wimbledon during summer holidays from Belgium, watching it on TV.Â  You just kind of felt the magic coming through the television, I think.Â  So that was kind of my first connection with Wimbledon.

â€œAnd then as I got older, when I was able to be here for the first time as a junior, it was just very special.Â  I mean, I think the first year that I played here, I was here just to take it all in.Â  I don’t even think I was here to play tennis.Â  I needed to just open my eyes and look at everything.

â€œIt’s so new.Â  It was such, you know, an amazing thing.Â  It was like to me this was like Disneyland to another child.Â  So it was such a beautiful thing.

â€œSo, yeah, I think the next year or the year after I was able to make the finals here in juniors, and that was a very special moment.Â  I was able to go to the championship ball.Â  Won doubles here.

â€œSo I have a lot of good memories, a lot of special memories also emotionally with my family and my with my dad.Â  Yeah, it’s a nice place to go back to every year.

Kerber will play Lisicki in an all-German battle for a semifinal spot.

â€œI mean, for sure it will not be easy match against Sabine, said Kerber.Â  â€œShe beat Maria today.Â  I know she play very well on grass.

â€œI mean, I said before the tournament I will look round to round, and now she is the next round.Â  It’s good for Germans to have two players in the quarters and one of us in the semis.

â€œSo, I mean, it will be a good match, I think, and I will try just to focus on me and try to do my thing on the court.Â  We will see who will win the match.â€