You are here: Home / Contributors / Murray Once More into the Semifinal 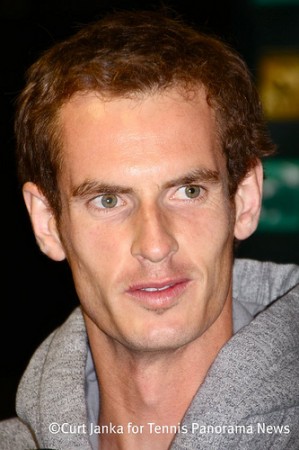 Optimistic interview questions from the day before, labeling Ferrer as a clay-court specialist were quickly refuted by Murray who pointed out that Ferrer had been on quite a winning streak since the start of the grass-court season.

Murray predictably started slowly, with Ferrer matching him in the tenacious retrieving stakes “ seemingly all over the court, all of the time.

Even though Murray clawed his way back to force a tiebreak, Ferrer was more dominant, taking the first set, and muting the Centre Court crowd.

This match was always going to be close, against the world No.  4 and 5, but the momentum swung Murray’s way in the second set, as Ferrer failed to capitalize on chances to close out the set.

Ferrer said: “I think the key was in the second set, when I have 5-4 or I had one set point in the tiebreak.

“But Andy, in important moments he play really good.

“He played more aggressive than me, and he was better, no?”

Ferrer will return to the grass, representing Spain in the Olympics, later this month.

A brief rain delay meant that both Murray and Ferrer were having physiotherapy in the same treatment room, at the same time.

But on the continuation, Murray seemed to have the edge although with just a single break separating them in the third set, and producing an ace to win the match.

Murray felt he had improved as the match went on.

“I knew it was going to be tough.

“You know, it’s the hardest match that I played.

He continued: “€œI was expecting a lot of long rallies.”

He said: “Obviously the goal now is to win the next match and try and get through to the final for the first time.”

Murray still sought to play down his chances, saying that the year he was defeated by Andy Roddick, he had been playing well, but Roddick had played unbelievably well in the semis, and then in the final.

Nor did he dismiss the idea of facing Jo-Wilfred Tsonga in the semifinal, instead of Rafael Nadal.

He said: “Just because I lost to him a few times doesn’t mean I’d never want to play against him.

“I don’t mind playing against Rafa.

“I’ve won against him in slams before.â€

Murray played in front of Royalty today in front of the Duke and Duchess of Cambridge, as well as the tennis royalty of Andre Agassi, Steffi Graf and Rod Laver.

Certainly the Centre Court crowd were not backwards in coming forwards with their advice, with someone shouting out in the crowd to stop playing drop-shots!

“It’s funny.”  In the last whatever, four matches or something, five matches I played, when they work no one says anything.

His demeanor seems to have matured, and he is handling the pressure of carrying the home country’s hopes on to the next match.

“When I first played here I didn’t understand what it was like,” he said, â€œit still took a few years for me before I understood how important this tournament was to me, how important it is to tennis, and also this country, as well.”

Murray will face Tsonga on Friday but for now it is best not to dwell on the weight of history on his shoulders.