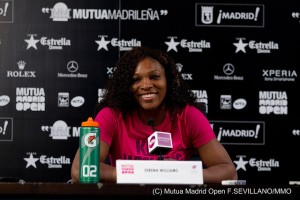 WIMBLEDON â€“ Serena Williams will be looking to capture her fifth Wimbledon title on Saturday, along with her 14th major overall. The 30-year-old American launched a record 24 aces past Victoria Azarenka to move into the Wimbledon final 6-3, 7-6(6), her seventh Wimbledon final.

â€œI have so much appreciation for every moment on the court,â€ Williams on her recent play.Â  â€œI really take pride in playing, especially playing such big, amazing tournaments like this.

â€œI just want to do the absolute best that I can at all moments.â€

“I’ve been working so hard,” Williams said, “and I really, I really wanted it.”

Williams was utterly dominant on her serve in the first set winning 20 of 24 points on serve, 17 in a row.

â€œOnce again, I definitely thought I served well,â€ said Williams.Â  â€œActually during the match I thought I didn’t serve well.Â  I thought, Gosh, I got to get more first serves in.Â  I don’t think my firstâ€‘serve percentage was up there.

â€œSo, you know, but I think it was pretty close.â€

Williams will play Polandâ€™s Agniezska Radwanska for the Wimbledon title on Saturday.

Williams is 2-0 against Radwanska. Both wins came in 2008 and on at the Wimbledon quarterfinals.

â€œWell, it’s the Wimbledon final,â€ Williams said. â€œI don’t know any other way to come out except my best.Â  Radwanska has been playing well.Â  She won Miami.Â  She’s been consistent this year, more consistent than I have.

â€œShe has great hands and she does everything so well.Â  If I come out flat, I won’t win.â€

Williams has also reached the doubles semifinal with her sister Venus.