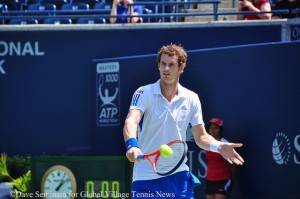 WIMBLEDON – It all ended with smiles, and a hug at the net between two players who genuinely respect and like each other, but Andy Murray took one step closer to a nationâ€™s dream in defeating Jo-Wilfred Tsonga, 6-3, 6-4, 3-6, 7-5.

Statistics spoke of a 5-1 win/loss record, but Jo-Wilfred was the guy who beat Murray in the first round of the Australian Open, in 2008.

Murray led two sets to love, but it was Tsonga who put Roger Federer out of Wimbledon in 2011, after being in that same position.

Even when Murray started aggressively, quickly and decisively, at the back of peopleâ€™s minds, Tsonga still remained a threat.

At the start of the match, he seemed to be struggling with a back injury, and after an off-court medical time-out, Tsonga returned a new man, leaving Murray shrugging up at his box after Tsonga took the third set.

Tsonga said: â€œHe didn’t give me one chance, you know, one chance to go to the net.
â€œHe didn’t miss one serve.Â  He was really, really good.

â€œAfter that his level was a bit down in the third set and I took my chance.â€

Tsonga also had to contend with a wayward ball to his groin which left him doubled over, not surprisingly.

When asked if he had ever been hit like that, he replied: â€œNever.Â  But I will have a revenge one time.â€

As the weight of expectation settled all around the court, on match point in the fourth set, Murray had to wait for a challenge to see if he had sealed a place in his first Wimbledon final.

Tsonga waited at the net while Hawkeye did its thing, smiling, he and Andy had a brief chat at the net.

And what of the man, now, who would be king, come Sunday?

Well given that his first question in press was: â€œWhat were you doing 74 years ago?,â€ it is clear that the sheer weight of history still looms heavy.

The reality is stark, but Murray is philosophical.

Murray said: â€œIt’s a great challenge, one where I’m probably not expected to win the match, but one that, you know, if I play well, I’m capable of winning.

Above all he still has respect for Roger Federerâ€™s achievements, both in the past and over this tournament.

â€œWell, he’s obviously one of the greatest players ever to have played,â€ he said, â€œI’d be surprised if he wasn’t the best in terms of his win/loss ratio here.â€

Murray said: â€œWell, I knew it was in when it left my racquet, and then I thought that he challenged it.

â€œI mean, obviously it was close, but then the umpire said to me that the ball had been called out and that he hadn’t overruled it.

â€œSo then obviously I challenged, and that was it.â€

Murray-mania could engulf the Womenâ€™s final tomorrow, and Murray had nothing but praise for Serena Williams.

He said: â€œShe’s probably one of the best female athletes ever in terms of she’s got strength, she’s quick, you know, she’s got very powerful, powerful strokes.

â€œShe’s probably one of the best that the woman’s tour has seen for a few years.â€

Hopefully people will remember we have one final to go before Sunday.

As for Murray, he will allow himself the luxury of enjoying the sensation of eclipsing Bunny Austin, and then back to work tomorrow.

One final thought, though.

In 1977, in the Queenâ€™s Silver Jubilee Virginia Wade won the womenâ€™s singles final.Â  In a Diamond Jubilee year, could we see a menâ€™s champion at last?

He will have to play the best tennis of his life to do it, but I think he would not want it any other way.