You are here: Home / Contributors / Watson defeats Stephens on First Day of Bank of the West Classic

STANFORD, California – It was a beautiful day for a tennis tournament.Â Â  The Bank of the West Classic opened on Monday with weather in the mid 70s and sunny. 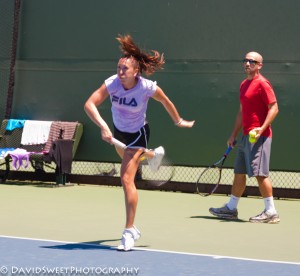 None of the top seeds were in action on Monday, but a few were on the practice courts.Â  I caught No. 3 seed Jelena Jankovic practicing serve/return drills with No.2 seed Dominika Cibulkova. 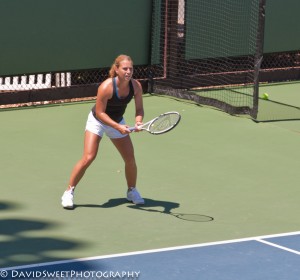 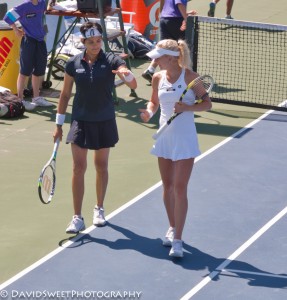 Daniilidou and Radwanska slap a low 5

The midday session saw some tightly contested doubles matches, where the winners each came from down a set before rallying to victory.Â  On one of the side courts, Daniilidou/U Radwanksa d Lee-Waters/Moulton-Levy in three tight sets 6-7 (4), 6-4, 10-2. 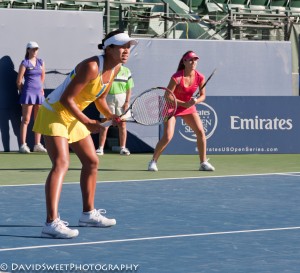 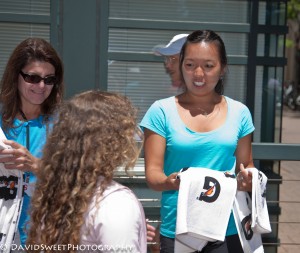 I was lucky to catch Vania King talking to a group of grade and middle-school children brought to the tournament by local nonprofit Harper for Kids.Â Â  She talked about her start in tennis at age 3, and how hard work and goal setting can lead to success.Â  She then handed out towels to the children as they left. 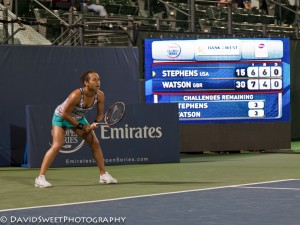 In the main night match, Heather Watson defeated rising star Sloane Stephens in a see-saw match riddled with errors from both players.Â  It was tough to watch.Â  The players traded so many breaks of serve that the crowd was left silent for most of the match.Â  Notably, Stephens was having trouble with her backhand and Watsonâ€™s off-paced shots.Â  Watson beat Stephens 7-6 (5), 4-6, 6-1. 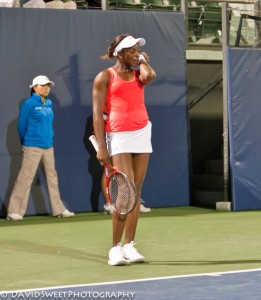