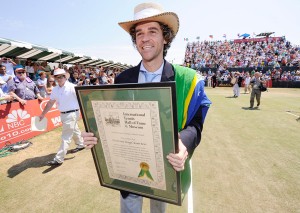 NEWPORT, Rhode Island – The skies in Newport were dry, but the eyes were not, as Jennifer Capriati and Gustavo â€œGugaâ€ Kuerten headlined the 2012 class of inductees into the International Tennis Hall of Fame. The ceremony was held Saturday, July 14th on Center Court at the International Tennis Hall of Fame in Newport, Rhode Island.Â  Capriati and Kuerten, former top-ranked players elected to the Hall of Fame under the Recent Player category, gave stirring speeches that touched the tennis fans in attendance.Â  Other inductees this afternoon were Randy Snow, the late wheelchair tennis champion and advocate; Mike Davies, in the Contributor category; and Manuel Orantes, in the Master Player category.

Monica Seles, a 2009 Hall of Fame inductee, was selected by Capriati to introduce her at the ceremony. It was a fitting selection as both players burst on the tennis scene just months apart as teenagers, and set multiple â€œyoungest everâ€ records for womenâ€™s tennis.Â  Capriati, a three-time champion at Grand Slam events and Olympic gold medal winner, was emotional throughout her acceptance speech.Â  While honored by the Hall of Fame recognition, it closes a chapter in her life that Capriati was not quite ready to close. It signifies that there are no more comebacks in store, and her career would end as the result of wrist and shoulder injuries. But as she did throughout her career, Capriati persevered today. She expressed the joy and pain that tennis has brought to her life, and noted that tennis taught her what hard work and commitment mean. She thanked her friends and family for their love and support over the years, and also recognized the fan support she received throughout her career, a comment that was punctuated by someone in the crowd shouting â€œWe love you!â€

Alice Kuerten, Gustavoâ€™s mother, had the honor of introducing her son to the crowd. She spoke not of Gugaâ€™s French Open titles or number one ranking, but of his intangible qualities, his role as son and brother, and his philanthropy. Guga charmed the crowd with an unscripted speech, sharing his appreciation for all that tennis has provided him. His father introduced Kuerten to the sport, but passed away when Guga was a teenager. It was tennis, Kuerten noted, that provided him two new fathers in the form of his former coach Larri Passos, and older brother and manager Raphael. Kuerten was very close to his late younger brother Guillaime, who suffered from cerebralÂ  palsy and passed away in 2007, and thus found it fitting to be inducted on the same day as Randy Snow. Kuerten also thanked Mariana, his wife and mother to their five-month-old daughter.

Randy Snow passed away in from a heart attack in 2009, so his father Tom accepted the award on his behalf. A successful junior tennis player when he was paralyzed at age 16, Snow found his success as a wheelchair tennis champion and gold medal winning Paralympian. Â Tom thanked Brad Parks, a fellow Hall of Fame member who created the concept of wheelchair tennis, and the various federations who have supported wheelchair tennis.

Mike Davies was awarded for his leadership behind the scenes with tennis. He was the driving force behind several changes in tennis targeted at making it more television friendly. Thanks to Davies, we have yellow tennis balls, blue courts, colored clothing, and chairs on changeovers. Each of these advances made tennis more marketable, and contributed to increased popularity of the sport in the 1970s. Davis thanked his fellow pros and co-workers for todayâ€™s honor.

The Hall of Fame president Stan Smith introduced Manual Orantes, and noted Orantes was not only a great champion, but a great sportsman.Â  Orantes looked back on his 1975 U.S. Open title over Jimmy Connors, and semifinal comeback over Guillermo Vilas earlier in that event, as the greatest matches in his career. He expressed appreciation for his Barcelona tennis club for making him into a champion.

While many tears were shed during the ceremony, the newest Hall of Fame members were all smiles when they took a final march around Center Court.