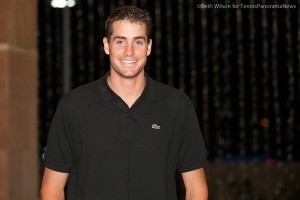 NEWPORT, Rhode Island – The 2012 Campbellâ€™s Hall of Fame Tennis Championships in Newport, Rhode Island had one of the strongest fields in tournament history, and that carried through to the semifinal matches on Saturday.Â  Former world number one, and a two-time Grand Slam event champion Lleyton Hewitt of Australia battled the 2009 Newport titlist Rajeev Ram of United States in the first semifinal. That was followed by an all-American match-up of 2012 Olympic teammates John Isner and Ryan Harrison.

While Hewitt has played sparsely recently, thanks in part to four surgeries over the past five years, he showed he still has his competitive spirit intact. He fell behind early in the match 1-4, but swept the final five games to take the opening set, 6-4.Â  The second set again found Ram jumping to an early lead. A third set seemed certain as Ram held two set points when serving at 5-3, 40-15. But back-to-back double faults by the Carmel, Indiana resident gave Hewitt the opening he needed to level the second set. Ram, who is ranked No. 118 in the world, showed why he has a winning record on grass courts in his career, and continued to pressure Hewitt with aggressive play.Â  He reached three more set points as Hewitt served at 5-6, and finally captured the set 7-5 when he forced the Australian into a backhand error.

Hewittâ€™s ranking of No.233 is a steep drop from the top ranking he held in 2001 and 2002, but he still shows glimpses of the game that took him to the top. Hitting dipping service returns and pinpoint passing shots, he again swept five consecutive games from Ram to build a 5-1 lead in the third set.Â  As Hewitt served for the match, Ram continued to battle and earned a break point. Hewittâ€™s accurate groundstrokes forced errors from Ram, and Hewitt battled his way into his first tour final since his 2010 Halle victory, advancing 6-4, 5-7, 6-2.

The second semifinal saw the crowd split between rooting for Isner, the top-ranked U.S. player, and Harrison, his fast-rising countryman who turned 20 just two months ago. After early-round losses at the French Open and Wimbledon, Isner is trying to recapture the form that brought him to a career-high No. 9 ranking in April of this year. He was up to the task in the opening set, scoring five aces, and winning 91% of the points when getting his first serve into play. Harrison, now ranked No. 48 in the world, revealed some weapons as well, and neither player could reach a break point in the opening twelve games, reaching a tiebreaker to settle the first set. The top-seeded Isner had the edge throughout the tiebreaker, and a Harrison double fault on set point gave Isner the opening set 7-6, while Harrison could only kick a tennis ball out of the stadium in frustration.

Isner, the defending Newport champion, elevated his game in the second set, and the tenor of the match changed. Harrison grew increasingly irritated by his play, and his inability to make a dent in Isnerâ€™s service games. Isner, on the other hand, reached deuce in four out of five Harrison service games. An early break gave Isner the 3-1 lead in the second set, and he broke Harrisonâ€™s serve again to end the match, 7-6(4), 6-3.

Notesâ€¦ Isner and Hewitt have met twice before, and Hewitt leads the head-to-head 2-0, with wins on hard court (Shanghai 2009) and clay (Dusseldorf 2010)â€¦Â  Isner is looking to become the fourth player to defend his Newport title (Bryan Shelton, 1991-â€˜92; Greg Rusedski, 2004-â€™05, and Fabrice Santoro 2007-â€™08)â€¦ Hewitt is playing in Newport for the first time since 1998, but with 80 weeks at No. 1 in his career (9th most of all-time), itâ€™s likely he could return to Newport as a Hall of Fame inducteeâ€¦ Ramâ€™s semifinal result will raise his ranking to No. 104, just outside the Top 100 and his highest rank in two yearsâ€¦ Harrison is the second youngest player in the Top 100; only Hewittâ€™s countryman Bernard Tomic is five months youngerâ€¦