You are here: Home / Contributors / Vendors and Players love in town venue at Atlanta Tournament 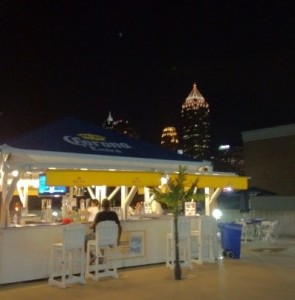 ATLANTA, Georgia – One of the best things about the change of locale for the BB&T Atlanta Open is the location. Â Set in what feels like the village of Atlantic Station surrounded by theÂ skyscrapers of Atlanta, the tournament got underway on Monday with its first main draw play. Â Over the weekend of qualifying, many of the vendors choseÂ not to open their tents, though they’re busy today. Â Overlooking stadium court and court one, the vendors line a street just off Market Street that leads into the facility. Â That’sÂ right – outside the stadium!

The official tournament vendor and stringing provider, Your Serve Tennis, was seeing a brisk business prior to theÂ 4:00 PMÂ session, featuring Jack SockÂ vs Alex Bogolomov. Â Dale Queen, the owner, said “This is a great venue; all the stores, restaurants. Â  I’m sure the players love it! Â Everything is right here atÂ Atlantic Station that they could want or need.” Â His only question was OTP v. ITP- outside or inside the perimeter. Â Atlanta is encircled by I-285, aÂ perimeter connecting three highways so that travelers and shipping can go around the city without coming through downtown. Â Locals that live outsideÂ the perimeter sometimes view the trip “downtown” as a hassle. Â For me, it couldn’t have been easier!

Bruce Reeks, with League Tennis, said “I love the in town location!” Â James Gordon, manning a booth for the Atlanta Youth Tennis Foundation, said “I likeÂ the central location. Â People from every part of town can get here easily.” That’s an understatement- the courts are just feet away from theÂ downtown connector, the joining of interstate 75 and interstate 85 that bisects the city.

Ryan Harrison said “I haven’t played on center court yet, but the area is great, the hotel is great, restaurants are great. Â I know all the players areÂ looking forward to it.”Â Â Jack Sock agreed; “Love the venue with the skyscrapers around Center Court.”