You are here: Home / Contributors / Stringer Stories in Atlanta 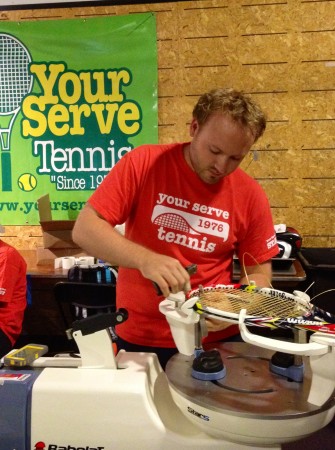 Adam Queen from Your Serve Tennis, Photo by Herman Wood for Tennis Panorama.

ATLANTA, Georgia – At Atlanta’s BB&T Open, players are on a plane far above the recreational, league player or even teaching professional. Yesterday, Jack Sock recorded a 141 mph service ace while playing Alexander Bogomolov. Bogomolov had a few thunder claps of his own (or was that the usual Atlanta summer thunder storm that interrupted the match?). I know they’re bigger, stronger, and certainly better conditioned, but how is it possible to hit a ball 40 mph faster than the average Joe USTA? The racquets are the same, right? They’re using the same string, aren’t they?

I spoke to Adam Queen, stringer from Your Serve Tennis, the official stringer for the tournament to find out. “All the players are particular. They know what works best for them for different courts, balls, and conditions.” Conditions? “Most go up on tension with heat & humidity because the ball tends to fly.” Unlike you or I, professionals don’t need the stringers’ advice. They’ve experimented with different strings, tensions, number of knots and everything else you can imagine. Queen’s job is to meet those specs, unlike in one of his stores, where he’ll talk to a customer to find out what they need. Just like you and I, the pros want quality and consistency, but they want it to a high level. As an example, most players want their racquets done as close to match time as possible. Mardy Fish wants the second racquet he’ll use delivered ten minutes after the match starts! How would that make a difference?

It turns out that strings lose tension with time, not just use. Polyester string can lose thirty percent overnight! Alright, I could get my racquet strung just before my match if I could hit a 140 mph serve!

“That could be kind of tough on your arm if you use the same string the pros do and you’d have to restring for every match.” I asked Queen why it was tough on the arm. “Almost every pro uses polyester. Polyester string loses tension relatively quickly and becomes dead. Professionals’ shoulder, wrist, and elbow are better able to handle the demands of daily play and demanding equipment.” So that’s why my shoulder hurts when I hit with that year old polyester string! “They restring every time out.” That sounds expensive! So what else do they do differently? “Jack Sock strings at 40 pounds. James Blake uses 63 pounds. Both use polyester.” I guess that means I can play like Sock if I string at 40 and like Blake if at 63? Oh, I forgot- I don’t practice for hours on end every day and do physical conditioning for hours on end. What can I do?

“Be willing to experiment. Talk to your stringer. Give polyester a try, but be willing to cut it out after a few weeks even if it doesn’t break.” You think maybe I can hit that 140 mph serve, just once?