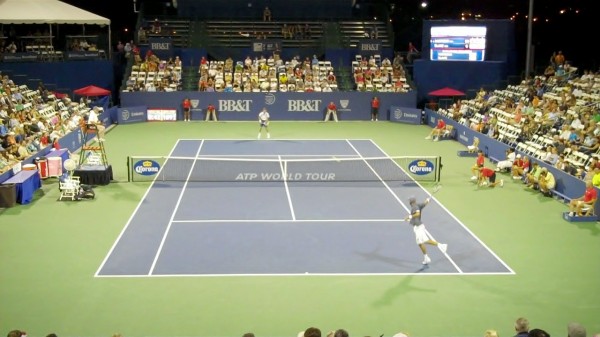 Atlanta, GAÂ  USA – In a contest pairing a seasoned veteran with a rising power player, experience prevailed as James Blake outlasted 6 seed Ryan Harrison 1-6, 6-3, 7-5 at the BB&T Atlanta Open Tuesday.Â  Blake, still adjusting to knee surgery last year to correct a problem with tendentious, found a way to pull it out after only winning one game in the first set. â€œThe first set was closer than it seemed. There were a lot of break points in the first game. I think I had a lot of break points later and a lot of game points I couldnâ€™t close out,â€ said Blake.

â€œI think I was doing a great job defending. I wasnâ€™t as accurate with my shots. I wasnâ€™t putting balls away. I wasnâ€™t closing points. He can run away with it then. His serve is big enough to get free points. Luckily Iâ€™ve been in matches like that before. Iâ€™ve been down before. I didnâ€™t let it get to me. Once its one set whether its 6-0 or -7-6 itâ€™s over. I tried to fight back and got a lead in the second set and tried to hang on to that.â€

Harrison, who is heading to the Olympic games after this event used a power serve to dominate the first set but was not able to capitalize on breaks in the 3rd. â€œHe played a pretty good game. I missed a couple of returns and he made some first serves,â€ said Harrison. â€œThe 4 all game, I held a good game and then he played a good game at 4-5.Â  Itâ€™s a tough spot.Â  When you put yourself in that type of position the game can go either way. Itâ€™s been going my way some this year. Tonight it didnâ€™t. Itâ€™s not devastating. I still have confidence in myself. I still had a pretty good season. Itâ€™s one match. Iâ€™m going to learn from it and try not to make the same mistakes again. I guess there are some times in there I lost concentration but ultimately in the match I kept it together and I was trying to do my best and it didnâ€™t go my way.â€

Blake acknowledges he is young in the real world but aging in the tennis world. â€œ32 is old in tennis years. I definitely try to keep that in perspective. Iâ€™m one of the lucky ones who get to retire when I can still enjoy playing golf and throwing a ball with my kids so Iâ€™m definitely lucky in that regard.â€

He was clearly the crowd favorite but recognizes the potential in the talent of a younger player. â€œAs they get to know players like Ryan, heâ€™s on been on tour for a couple of years, they might not know as much about him. Heâ€™s a good kid so Iâ€™m sure they will start cheering for him a lot more. Heâ€™s improved a lot. Heâ€™s matured a lot. Heâ€™s doing a lot of the right things. And thatâ€™s what Iâ€™ve said before about him. Iâ€™m terrible at judging talent. I hate making predictions about someone going to be top ten, top 100.Â  But one thing I will predict about him is he will get the most out of his talent. He is a hard worker.Â  Wants to learn. Is curious. Heâ€™s doing things the right way. Tonight he lost a close match and Iâ€™m sure he will learn from them. Iâ€™m sure he will figure out what maybe he could have done better. Heâ€™ll get the most out of his talent and his career and thatâ€™s all you can hope for.â€

He may be correct in that assessment. As Blake left the lockeroom a few fans waited outside for autographs and photos. One lady who lagged behind held a photo of Harrison in her lap. She was waiting for him to come out so he could autograph it. Play continues today with 4th seeded Andy Roddick and menâ€™s doubles.