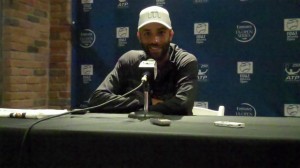 ATLANTA, Georgia – James Blake will be the first to admit that his first round victory at the BB&T Atlanta Open was match that he was supposed to lose. The 32 year-old tour veteran out lasted 20 year old Ryan Harrison for a 3 set win that delighted the crowd at the Atlantic Station venue.

On paper it didn’t seem close..Harrison is 20 years old, ranked 43rd and bound for London for the 2012 Olympics. Blake, at 32, has seen his ranking slip out of the top 100 to 110. “I starting to play guys who grew up watching me”, said a smiling Blake after the match.

Blake is not considered a threat to win ATP titles, but he remains a crowd favorite and on this night he showed that his wisdom, remaining skills and even couple of friendly bounces off the top of the net can result in victory..

Health has been an issue for James, who talked about his knee surgery back in November. He looked to be moving well. His serve was not as crisp as his fans would remember. That is due to a shoulder injury that he continues to play through..

But after the match he told me about his new inspiration to play good tennis, the recent birth of his daughter. Blake said” This is the first match that I have won since she was born. Tonight her daddy is a winner.”

Great playing “Pops”.. You did your baby girl proud…

Sam Crenshaw is a 25-year veteran of sports broadcasting. He started his career in Augusta, Ga., working as a sports reporter for WRDW-TV and later worked at WFMY-TV in Greensboro, N.C. He moved to Atlanta in 1997 to become a sports broadcaster at WXIA-TV and is now the weekend sports anchor for WXIA covering amateur and professional sports statewide.