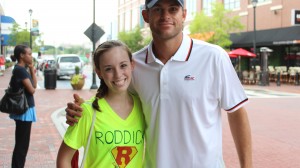 ATLANTA, Georgia -Fans of any sport can be rabid. If you go to LSU for a football game dressed in opposition colors, you’ll be taunted with chants of “Tiger Bait”. In Athens, Georgia, home of the Bulldogs, you’ll be barked at. Duke basketball fans are famous for their imaginative cheers. Tennis fans? If the NCAA Collegiate Tournament is held in Athens, there is some barking and there’s a certain collegiate coach who famously held fans at bay from atop a car with a wooden racquet back in the day, though that’s another story. Professional tennis fans are usually a laid back lot (unless it’s Davis Cup!) They clap politely for any good shot and sigh with disappointment at near misses. Ask who they’re cheering for and you’re likely to get a shrug. 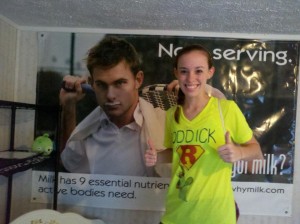 Then there’s Amber Lynn Smith. Amber is a typical college student, hoping to become a teacher, drinking lots of milk. Milk? I really don’t know if she drinks milk or not, but it has a lot to do with her being a tennis super fan. When she was ten, she got interested in the game because of friends, but took a special interest in Andy Roddick. In fact, she fell in love with tennis because of his passion for the game. She wanted to hit the ball as hard as he did, so she wanted to be a better athlete. There was one of the milk promotional pictures at her school, so she asked for it at the end of the school year and it was given to her. It’s huge and covers one wall of her room. She got another poster and put it up in her locker at school.

She was able to make it to Roddick’s first match in the BB&T Atlanta Open and had a chance to meet him. We’ve all heard of the spoiled athletes who won’t take the time for a kid, much less an adult. It makes them hard to cheer for. That wasn’t the case here. Roddick couldn’t have been more gracious. He noticed Amber. She was wearing a shirt she had made with a super “R” and “Roddick” above the logo. On the back, it says “Forget those other superherosâ€¦” He complimented her on the shirt and took time to take a quick picture before his press conference. She had to wait around because they didn’t realize the picture didn’t take the first time until after. Roddick was more than happy to pose again and to spend a few minutes talking with her and to autograph her shirt. 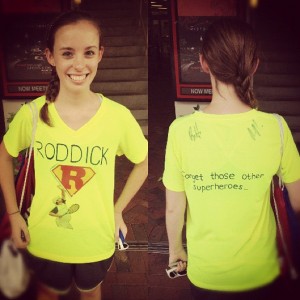 Amber hopes to become a teacher, and I expect she’ll be a very good one, especially if she brings the same passion to her chosen profession. She also hopes to one day be able to teach tennis to children so they can start at a younger age than she did. She thinks the current under 10 initiative would have helped her greatly. She feels if children start at a younger age, they’ll grow up healthier.