You are here: Home / Features / Courier talks about upcoming Olympics and Davis Cup 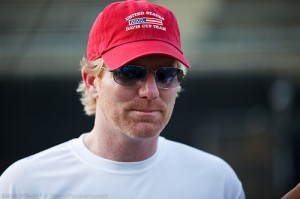 NEW YORK, NY (July 18, 2012) – Tennis Panorama News had a chance to speak with Hall of Famer, tennis entrepreneur and Davis Cup CaptainÂ  Jim Courier at the NASDAQ on Wednesday in conjunction with the announcement of the dates and cities on PowerShares Series tour.

Courier gave us his predictions for the upcoming Olympics as to how he thinks Americans will fare.

“If you are looking at favorites, you just have to look at the Wimbledon results, because it’s easier to line-up what happened with what may happen and the Olympics,” Courier said.

“You may see some more upsets early because of the format – it’s two out of three on the men’s side. The women’s side not as much, it’s standard for them.

“So on the men’s side we know we’ve got a couple of guys that could really push. Ryan Harrison, I think is dangerous. Of course, Donald Young unfortunately missing a lot of confidence right now. He’s been having a rough go but maybe he can turn his year around with a run at the Olympics.

“On the women’s side Serena (Williams) should be the heavy favorite. She deserves to be. In the doubles I think that the Americans should be favorites as well.”

Courier, in his role as Davis Cup captain is preparing for the US’ semifinal World Group tie against in Spain September 14-16:

“That’s going to be the “all-ambulance team” for both groups because think about what these players have been going through from playing the clay court season to the grass court season to the Olympics to the US Open and Davis Cup comes on the other end,” Courier explained.

“That’s a big ask for everyone physically. So neither the Spanish captain Alex Corretja or me know exactly what we are going to have player-wise because we have to see who’s standing at the end of the summer. But of course we have a chance to win. Of course we will be the underdogs and that’s Okay.”