You are here: Home / Features / Isner, Roddick to meet in BB&T Atlanta Open 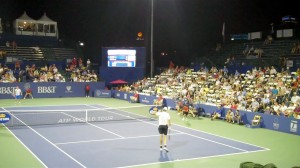 Atlanta, GA USA â€“ John Isner moved closer to reaching the finals for the third straight year at the BB&T Atlanta Open winning a hard fought battle over 19-year old wild card Jack Sock 7-6 (7), 6-4. Isnerâ€™s opponent made the first set a grueling match with powerful forehand winners that landed him into a tie break after an hour rain delay. â€œI came out really flat after the rain delay and that made the set anybodyâ€™s set,â€ Isner said. â€œI think had it not rained maybe I could have won that set a little bit easier.â€

The two were only 27 minutes into the match before it was halted by rain. Conditions became more humid as they resumed the first set with Isner up 4-1 and Sock serving. The first set alone helped pushed the match to over 2 hours, adding in the rain delay it finished well beyond midnight.

â€œThat took a little bit out of me. I focused so hard to try to win that second set. I let it slip away a little bit. The second set, it was gross out there. We were both sweating like pigs. Honestly, it was just disgusting. I canâ€™t imagine playing a third set right now.â€

Isner thanked fans for hanging around under tough conditions late into the night. â€œI never want to be the last match,â€ Isner said. â€œAnd itâ€™s raining. Thanks for staying until the end. I probably would have left.â€ With Mardy Fish out due to a turned ankle, Isner will not get the much anticipated rematch with last yearâ€™s champion heâ€™d hoped for but will face rival Andy Roddick in a marquee match up to advance to the finals.

Roddick made the semis by defeating fellow American Michael Russell 6-3, 6-4 in a two set match that lasted only an hour and 12 minutes. Two-time Olympian Roddick, clad in American stars and stripes tennis shoes, used his powerful serve landing 12 aces to dominate Russell in the match. â€œI felt good. The hot weather helps. It gives you different options.â€ Roddick said. â€œYou can kind of go with kicks, slices because everything works in this hot weather. I felt like I could make some speeds pretty accurately. I compare it to pitching a good ballgame. I felt like I could throw any pitch for a strike tonight.â€

Number 8 seed Go Soeda upset fellow countryman 3rd seed Kei Nishikori in a historic match to advance to the semis 6-2, 6-1. The two players met for the first time in Open Era history (since 1968) with the match broadcast live in Japan during the wee hours of the morning. The only other time two Japanese players met was in 1973 when Jun Kuki defeated Takeshi in Osaka.Â  Playing with nothing to lose, Go Soeda, 27, overpowered his higher ranked opponent with aggressive ground strokes that pushed Nishikori, 22, far beyond the baseline.Â  He will face Gilles Muller of Luxembourg who defeated Matthew Ebden of Australia 6-4, 6-4. In doubles action, Colin Fleming (GBR) and Ross Hutchins (GBR) will square off with Matthew Ebden (AUS) and Ryan Harrison (USA) while Xavier Malisse (BEL) and Michael Russell (USA) will see Raven Klaasen (RSA) and Donald Young (USA) to determine who will advance to the finals.