You are here: Home / Features / Atlantic Station is a winner for fans at BB&T Atlanta Open 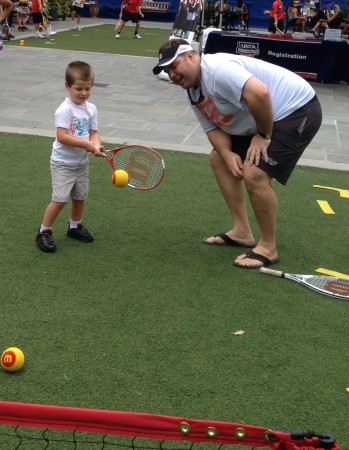 ATLANTA, Georgia – Atlantic Station is a hopping place! The first semifinal has been completed, with Gilles Muller over Go Soeda 6-4, 6-3 and Ebden/Harrison over Fleming/Hutchins 6-3, 6-3. The stadium has emptied into Atlantic Station, where folks are shopping, eating, drinking, and generally having a great time. Kids are shooting hoops at the Atlanta Hawks tent, playing tennis at the 10 under courts and playing tennis at Publix family zone. John Frierson was taking the opportunity to teach tennis to his son Robert on the 10 and under courts. He was looking forward to the showdown tonight. Olympic folks are here with interactive booths for adults and kids to try their skills in various Olympic events. 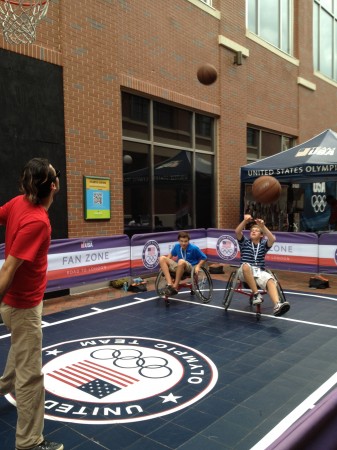 Michael Koenig and Jack Hendry tried their skills at basketball, Paralympic style! The event had them set up in wheelchairs trying to shoot baskets. They found the going significantly tougher than their typical basketball games, but several baskets were made. Their parents were having dinner at a restaurant somewhere at Atlantic Station while they had all kinds of fun! I asked if they were rooting for anyone in particular tonight. “Roddick!” Not for the Georgia boy John Isner? “No, Roddick is the best American.” I’m sure some Georgia Bulldog fans will have something to say about that. I expect a lot of barking! 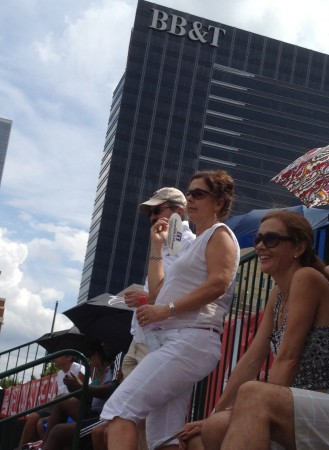 Eduardo and Andrea Baetti, with Ricardo and Alejandra Hein

Eduardo and Andrea Baetti, with Ricardo and Alejandra Hein, took in the first semifinal match today. Eduardo was sporting a Georgia hat. They didn’t have tickets for the night session but were planning lots of fun at Atlantic Station. He was definitely pulling for John Isner.

The official shirt vendor for the tourney pulled off a major coup overnight. They were able to work with John Isner and his foundation to have T-shirts printed out that say “Team Isner” in Georgia red and black. A portion of sales will go to Isner’s foundation. Sales were moving very briskly as they were already sold out of size large before the afternoon session was done. 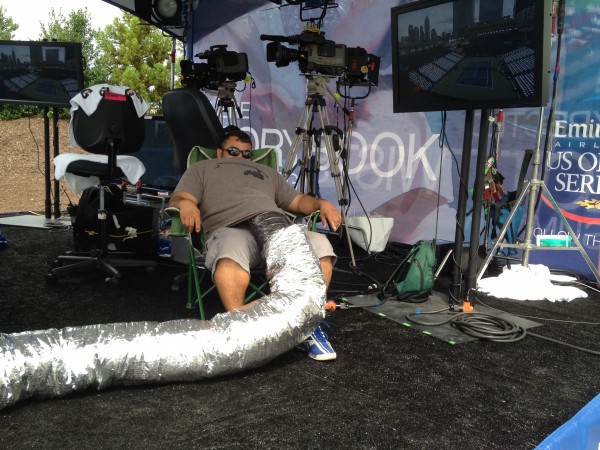 Everyone seemed to be having a great time and weâ€™re all very happy to be at Atlantic Station. It seems the players weren’t the only ones serving aces.