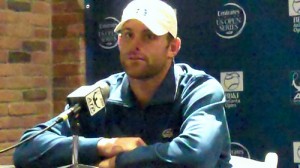 Atlanta, GA USA – In 2001 Shirley Franklin was elected Atlanta’s first female African-American mayor.Â  The Braves defeated the Houston Astros in the National League Division Series and an 18-year-old aspiring tennis champion named Andy RoddickÂ  won his first ATP World Tour title in the city when the tournament was played on clay. Eleven years later with a former No. 1 ranking under his belt, a wiser, more experienced 29-year-old Roddick defeated top seeded John IsnerÂ  6-4, 6-7(5), 6-4 to move a step closer to earning the title a second time at the BB&T Atlanta Open. â€œI think itâ€™s good. It was a long time ago, a different surface, a different time of year,â€ Roddick said. â€œThere are not a lot of parallels but I can say certainly itâ€™s nice to be back in the finals here.â€

Both players had loud and vocal fans present as they took the court in a packed, sold out arena under threatening skies that caused a 30 minute rain delay. Isner managed 26 aces to Roddickâ€™s six but the difference was his opponentâ€™s ability to convert points off serves. â€œI took care of my serve. I did what I was supposed to do. Youâ€™re not going to beat John if you get broken a lot. Â I was able to play off a little bit of trouble there at the net in the first set. I just competed well. I stayed in it even when I wasnâ€™t real happy about whatever was going on. I kept it together and competed well.â€ 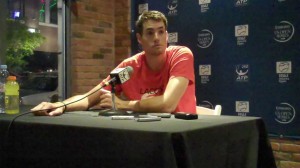 Isner has made the finals for the past two years losing to Mardy Fish while missing the finals this year in a loss to Roddick. â€œIt didnâ€™t go my way. He was the better player tonight. Thatâ€™s why he won,â€ Isner said. â€œItâ€™s pretty disappointing. Three years in this tournament I lost to two Americans, good friends of mine and itâ€™s tough. Iâ€™ve always wanted to win this tournament but it wasnâ€™t to be. Itâ€™s really no shame to losing to either one of those guys.â€

Roddick will compete for the singles title against Luxembourgâ€™s Gilles Muller, a lefty with a big serve that defeated 8th seeded Go Soeda of Japan 6-4, 6-3 to gain a spot in the finals. Mullerâ€™s serve dominated the match with 17 aces, winning over 90 percent of his first serve points in only 74 minutes over his 54th ranked opponent.Â  Muller said he had no plans to watch the semis but understood he would face a good player in the championship match. A victory would mark his fist title at the Atlanta tournament.

At stake is a trophy along with an $86,270 check for the winner with the runner up receiving $45, 435 and 150 ranking points. Roddick has faced Gilles at least three times losing once in 2005 but readily admitted that loss was a long time ago. â€œIâ€™m going to have to put a lot of returns in play against him. He will probably try and come to the net more often than John (Isner) and his serve will be coming from a different angle.â€