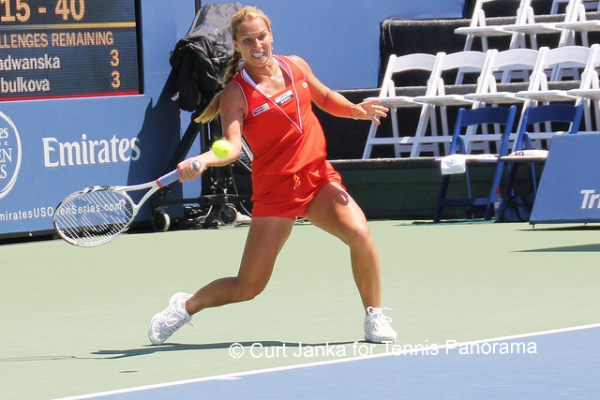 Dominika Cibulkova added a second winnerâ€™s trophy to her collection with her victory over friend Marion Bartoli 6-1, 7-5 in the final of the Mercury Insurance Open in Carlsbad, California.

After a straight forward first set which saw the Slovak knock multiple winners past Bartoli, with the 6-1 set ending on a Bartoli double fault.Â  The second set proved to be much more of a contest. Cibulkova rallied past the Frenchwoman, coming back from two breaks down at 1-4 to win six out of the last seven games to clinch the match in 95 minutes.

“I was enjoying the final so much,â€ Cibulkova commented. â€I just played my game and in the first set everything was going my way. My forehand was working today 100% and also my service return. I’m also really happy that I turned it around in the second set and I didn’t give it up and I was still fighting for the set and I won.”

Bartoli came into the match having been on court four more hours than her opponent.

“She played extremely well and made me feel uncomfortable.â€ Bartoli said. I really fought extremely hard on the court, and being back in another final this year obviously means a lot to me and it’s good to have some wins before heading to MontrÃ©al and Cincinnati.”

“I lost, but Dominika played a great match,” said Bartoli.

“I wish her good luck at the Olympics.”

Bartoli will not be participating in the Olympic Games due to an ongoing dispute with the French Tennis Federation.

Cibulkova will rise to 13th in the world when the rankings come out on Monday. Her career high is 12th.

Cibulkova did not drop a set in her title run.