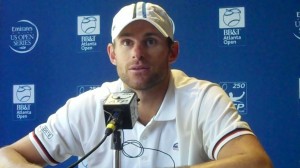 Atlanta, GA USA â€“ Under a brutally hot July sun in the deep south 29-year-old Andy Roddick raised the BB&T Atlanta Open championship trophy into the air before a capacity crowd after defeating Luxembourgâ€™s Gilles Muller 1-6, 7-6 (2), 6-2. It was a gesture he has repeated many times in his professional tennis life with 31 ATP World Tour titles already under his belt, but at this stage in his career, titles taste sweeter and number 32 felt like a steady cool breeze on a summer day.

â€œBeing a tennis player, a lot of people, they see it on TV. They think about it in terms of one match but itâ€™s almost like a lifestyle. Youâ€™ve got to eat right, sleep right. Itâ€™s a constant kind of battle when you are out there by yourself a lot,â€ said Roddick. â€œTo kind of now be approaching numbers that basically tell the story of consistency over timeâ€¦ itâ€™s something Iâ€™m proud of. I work pretty hard. I donâ€™t know that I have been able to pull off the shots that Roger or Rafa or someone like that can pull off. But I feel like Iâ€™ve done pretty well with what I was given. I sleep well knowing I havenâ€™t really cheated myself.â€

This title came no easier than many others in a match that lasted two hours and 13 minutes in 91 degree humid conditions under a blazing sun. Roddick had to get past a competitive match with No. 1 seedÂ John Isner that went late into the night to make it to the final. Muller, a left handed player whose highest world ranking reached 42 has experienced an incredible run among marquee players with career victories over Andre Agassi, Rafael Nadal and Roddick in 2005. Despite jumping out fast with a 6-1 victory in the first set forcing two service breaks he lost a close battle in the 2nd when Roddick was able to edge him out in second serve points won and second return points.

â€œI played very well in the first two sets. At the end of the second set, I got very tight,â€ Muller said.Â  â€œI felt like I was in a position to win that match. I was too nervous to close it and then Andy started to play better. He started to return my serves and put a lot of balls in the court. And I started to miss a lot. Maybe I lost the belief in myself to win that match too quickly.â€

By the third set Roddick became more aggressive, forcing errors and placing balls at speeds and angles difficult to get to. Service points won reached 84 percent while Muller managed only 50. “I know by now the score of a set is irrelevant,â€ Roddick said. â€œWhether itâ€™s 7-6 or 6-1, it still counts the same. With most other sports, you get way up in the first quarter and it actually means something in regards to the rest of the game. In tennis, itâ€™s not really the case too often, with the exception of momentum. You just try to start over and put some holds together. I was able to [slide] out the second set and I think he might have gotten a little tired in the third.”

Roddick won his second title of the season and his second ATP World Tour victory in Atlanta, the last coming in 2001 on clay. He has an early points lead in the 2012 Emirates Airline US Open Series Bonus Challenge Standings earning 70 in the tournament. He will head to London to join fellow USA teammates in singles and is paired with rival John Isner for doubles, a sight he admits few opponents want to see coming.

The BB&T Atlanta Open doubles title went to Matthew Ebden (AUS) and Ryan Harrison (USA) who defeated Xavier Malisse (BEL) and Michael Russell (USA) 6-3, 3-6, 10-6. Both teams knocked off talented top seeded duos to reach the finals. Ebden said it took confidence to pull off the win. â€œWe had a few chances in the second set and felt like we werenâ€™t playing our best tennis. We were pretty confident if we lifted our level a little, weâ€™d come through. Weâ€™re very good friends. I think it helps on the court. Itâ€™s great to find someone you really enjoy playing with. You get a lot out of it. Not just the wins, but you get improvements in your game.”

Harrison, who is also headed to London to join Team USA Tennis, said aggressive play made the difference. â€œThe way we play, we always try to push forward and play aggressive. Thatâ€™s the way both of us are comfortable playing. It comes down to execution for us. It doesnâ€™t matter if its singles, doubles, triples or whatever it is. If you win titles, you can always build off of it, so weâ€™re really fired up.”