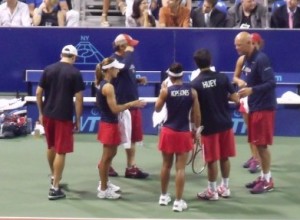 NEW YORK, NY – Hall of Fame football coach Vince Lombardi once said, “perfection is not attainable, but if we chase perfection we can catch excellence.” In World TeamTennis the Washington Kastles lead by coach Murphy Jensen have both attained perfection and caught excellence since late July of 2010. The 12-0 Kastles, 2011 World TeamTennis champions, who have already clinched a playoff spot, and have extended their winning streak to 28 victories in a row since July 22, 2010, with a 21-16 victory over the New York Sportimes (7-5) at Randall’s Island on Wednesday night.
The streak is now the second longest in team sports, behind the Los Angeles Lakers‘ 33 in a row during the 1971-72 NBA season.
Coach Jensen doesn’t seem to be consumed with the quest for another perfect season.
“Every day is another opportunity to make a masterpiece,” said Jensen. “We really live shot to shot, moment to moment, heartbeat to heartbeat. And we really don’t get too caught up in it actually.
“It’s really funny because I don’t think there is time in World TeamTennis because we are traveling so much. Just lugging bags around and getting to the next spot.”
Newcomers to the Kastles – Treat Â Huey and Raquel Kops-Jones proved to be the most valuable players for the Kastles against the Sportimes with both winning their doubles sets,Â particularly closing out the match with a mixed doubles victory overÂ  Hall of Famer John McEnroe and future Hall of Famer Martina Hingis 5-3.
Murphy pointed out the keys to success against for his mixed doubles team versus the veterans were Huey’s serves and Kops-Jones’s returns.
“It was fun,” Huey said, definitely, I grew up watching them play a ton. They’re really cool people. Some of the greatest players of all time. I’m thankful to have opportunity to play against them.”
“I played Hingis for maybe one game in World TeamTennis about three years ago,” Kops-Jones explained. ” Never played against McEnroe so that was something. You can see why sometimes there the legends that they are from the shots that they can make. Their hands are still pretty good…it never really leaves them.Â  It was fun.”
Both Huey and Kops-Jones are recent sunstitutes to the team due to some regular players competing in the Olympic Games in London.
“I’ve only been on the team since Sunday,” noted Huey.Â  But everyone on the team is so close that I’ve such a good time. They’ve welcomed me and everybody is so nice to me, we’re a real team. The atmosphere is unbelievable. I can’t think of a team that’s closer than this team, that’s why I think we’re doing real well.
“Everybody is accountable for each other and we come out and have some fun. Obviously we play a game and we play some tennis to entertain the fans. So it’s always good to get out here and have a little fun and obviously winning makes it a lot more fun and that’s always good.”
“There’s a bit of pressure since I just came in yesterday as a substitute,” Â said Kops-Jones. “So we want to keep that streak going for the regular team. It’s a bit of pressure but the more we keep getting the “w’s” the better we feel.
“I tell the guys,” explained Murphy, “I really don’t care about the scoreboard. You do what you do as good as you can do it, as hard as you can do it – that’s success. And if you do that and the scoreboard isn’t in our favor, we are still successful.” Murphy may not be from the Lombardi mold as a coach, but for 28 straight matches, he’s pushed all the right buttons for the Kastles to achieve excellence.
The Kastles will try to extend their streak to 29-0 when they visit the Kansas City Explorers on Friday.
Karen Pestaina for Tennis Panorama