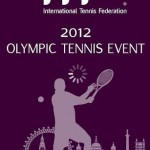 Fast Facts – Olympic Tennis Trivia by @JRCunniff
Trivia based on tennis since itâ€™s re-introduction to the modern Olympics in 1988.