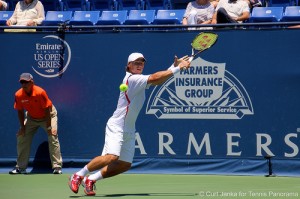 Los Angeles â€“ Qualifier Ricardas Berankis made upsetting the number four seed look routine in a straight sets win over Nicolas Mahut in the first quarterfinal of The Farmers Classic. Ranked No. 141, Berankis needed just one break in each set to dismiss his opponent, 6-4, 6-4.

Despite holding the top junior ranking spot in 2007, Berankis has been slow to break through at ATP events. The win earns him his first semifinal on the tour. Bernakis is just 22-years-old and the youngest player left in the draw. Sidelined by an injury for the first half of the season, heâ€™s only been playing since June and is happy with his progress saying, â€œSo far, so good.â€

Mahut struggled to return the Lithuanianâ€™s serve throughout the match. Berankis further frustrated Mahut by saving all three break chances he faced. On the other hand, Berankis seemed to get more returns in, keeping pressure on Mahutâ€™s serve with nine break chances in the first set alone.

The turning point in the match came in the ninth game of the first set. Both players had been holding fairly easily to that point and suddenly Mahut found himself fending off 6 break points before conceding the break after nine deuce points. 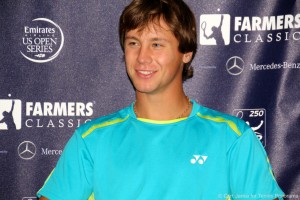 â€œI got lucky on a couple points,â€ said Berankis. â€œIâ€™m happy I was able to control my emotions and play well.â€

Berankis held quickly after that to close out the first set and continued the run by breaking Mahut in the opening game of the second set. From then on, both players protected their serve without much tension until the end of the match. Facing three match points, Mahut was able to save two before Berankis converted on his third chance.

This may be the furthest Berankis has advanced in an ATP event, but his run may not end yet. He will either face another unseeded player in Michael Russell or sixth-seeded Marinko Matosevic in the semifinal, which can only be viewed as a golden opportunity to debut in a final. Asked about the opportunity he said, â€œThe first time is always unbelievable and something new. I hope that tomorrow I can continue doing the way I am now.â€

While Berankis did not qualify for the Olympics this year, he hopes to represent Lithuania at the next games in Brazil.