You are here: Home / Features / Serena Sails, Federer Survives, Stosur Falls in First Round of Olympics 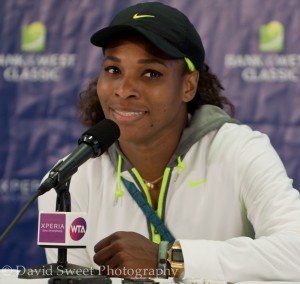 Both current Wimbledon title holders Serena Williams and Roger Federer began their quest for one of the few titles which has eluded them in their careers â€“ an Olympic singles gold medal.

For Serena Williams it was an easy task in London on Saturday as she disposed of a once former No. 1, now No. 20 Jelena Jankovic of Serbia 6-3, 6-1 on Wimbledonâ€™s Centre Court. One of the more famous spectators at the match was United Statesâ€™ First Lady Michelle Obama.

“It was great seeing Michelle there, said Williams. â€œIt just made me want to play better and I felt even better. We’re here for our country and to play well. I loved her dress, which is always nice. She is always looking good.

With the Olympics at Wimbledon, the crowds are a little bit nosier than usual. “Wimbledon is so quiet. You know, you don’t hear much talking,” Williams said. “But here you do hear talking. This atmosphere I didn’t expect. It’s bananas, and I love it.”
Roger Federer became erratic, while Alejandro Falla picked up his play in the middle of the match, but Federer still hung on to win 6-3, 5-7, 6-3. Federer squandered match points in the second set.

“He hung tough, and I got nervous,” the Swiss said. “It was a tough set to lose for me, particularly in the situation I was in. That’s the beauty of the game. Sometimes you’re one point away, and the next thing you know, you’re 25 points away.”
While the top seeds moved on a few seeds tumbled out. Fifth seed and reigning US Open champ Australiaâ€™s Samantha Stosur fell to Spainâ€™s Carla Suarez Navarro 3-6, 7-5, 10-8. Daniela Hantuchova dismissed (10) Li Na 6-2, 3-6, 6-3 and (12) Dominika Cibulkova was no match for 2-time Wimbledon quarterfinalist Tsvetana Pironkova 7-6(4, 6-2.

Harrison destroyed a racquet after double faulting on match point, while Young has now lost 15 matches in a row dating back to February making his 2012 record 2-18.

“Obviously you want to try to keep the focus on the task at hand, and try to control your emotions in a positive way,” said the American Harrison. “But sometimes you’ve got to let it out. I didn’t feel like I was out of control with the way I was handling myself on the court during the match.”