You are here: Home / Features / Goerges Upsets No. 2 Radwanska in First Round of Olympics 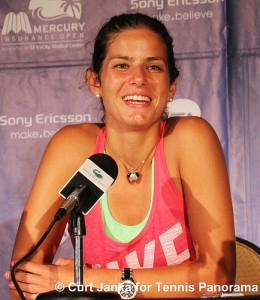 Under a closed roof at Wimbledonâ€™s Centre Court, Julia Goerges of Germany upset No. 2 seed and Wimbledon runner-up Agnieszka Radwanska from Poland 7-5, 6-7 (5), 6-4 in the first round of the tennis event at the London Olympic games.

No. 24 Goerges hit 20 aces and 56 winners past Radwanska inÂ  making both her Olympic and Centre Court debuts.

“I didn’t really think about it as it’s my first time on the Centre Court, and you just go there and enjoy it,” the German said. “You just play there as you warmed up outside. The courts were different. But that’s, for both, the same.”

“I felt pretty great there,” Goerges said about her agressive game. “My game is to be aggressive, and I know that doesn’t suit her pretty well because she’s one who wants to create a little bit of angles to play clever on the court.”

This marked the first indoor matchÂ  in the Olympics since the 1912 Games in Stockholm.

Goerges will face the winner of Varvara Lepchecnko – Veronica Cepede Royg in round two.