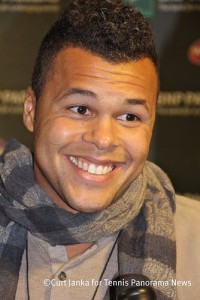 Two Olympic Tennis Event records were broken on Tuesday in London in the menâ€™s singles second round match between No. 5 seed Jo-Wilfried Tsonga of France and Milos Raonic from Canada, which Tsonga won 6-3, 3-6, 25-23 in 3 hours 57 minutes.

At the All England Club, Tsonga and Raonic resumed a match delayed by rain second round match Â at a set a piece 2-1 in the third. Little did they know that this that this match would prove to be a record-breaker.

Tsonga and Raonic held serve, again, and again and again â€“ altogether 23 times each until Tsonga broke Raonic in the 48th game of the third to win the match 6-3, 3-6, 25-23. The match, at 66 games long set a record for the longest three-set match in Olympic history. The third set, at 48 games is also the longest-ever set at the Olympics.

The previous records for the most games in a 3-set match (63) and longest set (38 games) were both set at 1988 Seoul in a first round doubles match, in which Carling Bassett-Seguso/Jill Hetherington (CAN) defeated Mercedes Paz/Gabriela Sabatini (ARG) 7-6, 5-7, 20-18.

The previous record in menâ€™s singles event set in 2004 in the bronze medal when Fernando Gonzalez defeated Taylor Dent in the third set, 16-14.

“He served unbelievable, it’s really difficult. But I was strong tonight and I am really happy to go through,” Tsonga said after the match. 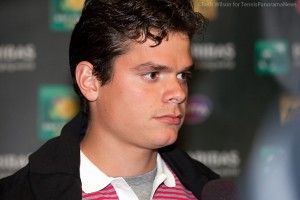 “I’m on the wrong part of Olympic history. It’s nice to be somewhere but hopefully I can change that and put my name on the right part,” said Raonic.

“I felt like I played really well for most of the match and I just let it slip away from me at the end.”

â€œThis is the only way for me to write my name in history at the moment,â€ Tsonga said in reference to the domination of the top three men in the world at major tournaments.

Tsonga will next face Feliciano Lopez for a place in the quarterfinals.