You are here: Home / Contributors / An Olympic View from Court 1, Third Round 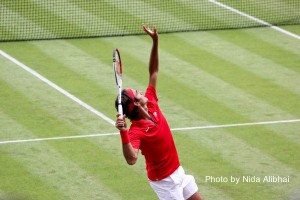 WIMBLEDON – Itâ€™s not quite the AELTC, is it?

Where once was the comfortably subtle dark green and purple livery adorning the iconic front of Centre Court, there are angular and lively 2012 shapes and colors.

The Olympic tennis is being hosted at the All England Club, where just three and a half weeks ago, tennis fans saw an emotional Andy Murray let down his guard after Roger Federer won a record-equaling seventh title.

There are some things that are reassuringly the same.Â  The stoic sighs of the fans on Court 1 who take their seats in the rain.Â  The queues for food and drink (and yes you CAN get the SW19 drink of choice, but due to sponsorship andÂ licensing, it cannot be referred to by a trade name)!

On Court 1, as the rain was spitting down, the players were brought out, including a reluctant looking Roger Federer, who was facing Denis Istomin, in the third round.

No sooner than they had sat down, the rain came down heavier, so off they went.

Play got underway around 45 minutes later, and although both players seemed to need time to find their range, Federer was soon away with a break, but did not have it all his own way, as Istomin clawed his way back, before another rain delay came.

As the resumption, Federer got the late break he wanted, taking the first set.Â  The second set started in much the same way, with Federer breaking Istomin in his first game.

This time there was no clawing back, although Istomin had played very well, and at times Federer had not looked as convincing as he did in the opening rounds of The Championships a few weeks ago.

As the sun shone down, finally, on Court 1, these ladies slugged away at each other from the baseline.

Neither were giving ground, although every now and again Petrova would throw out a hefty kick serve which left Azarenka all at sea.

Petrova had the edge on Azarenka in the first set tiebreak, and it was only after saving the first set point against her that Azarenka suddenly stepped up a gear, fighting back and eventually winning the tiebreak.

Although Azarenka started the second set with the momentum with her, she was broken before the first change of ends, although Petrova made heavy work of consolidating the break.

Azarenka got the better of Petrova with a single break, and although Petrova challenged on match point, it was to no avail.

It was almost a month ago to the day that Sabine Lisicki put paid to Maria Sharapovaâ€™s run to a consecutive Wimbledon final.

Neither was giving any leeway until the eighth game, when Lisicki stepped up her play and broke Sharapova.

However, a costly double fault sent her on the way to being broken straight back, to love.

The first set went to a see-saw tie break with Lisicki being let back in to the tiebreak that saw Sharapova edged out for the first set.

A single break margin saw Sharapova level the match and take things into a decider.

The third set started with two breaks of serve until things proceeded with serve as the clouds rolled in over the setting sun, and the light was fading.

Sharapova had the all-important break to lead 5-3 and serve out for the match.

David Ferrer and Kei Nishikori had been scheduled to finish up the dayâ€™s action but had been moved to Court 14, and then moved again to Centre Court to finish the action.

All in all, there are enough things familiar and heaven knows it was nice to spend some time in the sun, after such a rain-soaked Wimbledon.

But the volunteers sometimes enthusiastically let people in at non-change of ends pauses in matches, the ball boys and girls are maybe not as strictly drilled, and the numbers lines judges also seem to be pared down.

But for the most part the fans are reveling in a couple of weeks of extra tennis at SW19 and turn a bit of a blind eye to the different colors.

Ros Satar is a British Journalist- an IT Journalist by day, a Sports journalist part-time and her match observations can be found at the Chalkdust Chronicles (chalkdustchronicles.blogspot.com). Follow her on twitter at @rfsatar.