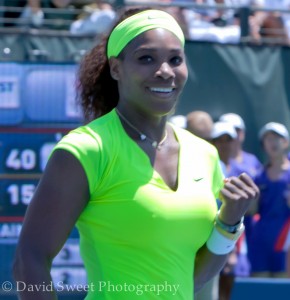 The win gives Williams a “Career Golden Slamâ€ â€“ winning all four majors and an Olympic singles gold medal. She is the only women a to have the career â€œGolden slamâ€ in singles and in doubles.

Williams was utterly dominant from start to finish, break Sharapova at will and shutting out the world No. 3 in the first set 6-0.Â  Williams rolled on to take a 6-0, 3-0 lead before Sharapova won her only game in the match. Williams went on to win 6-0, 6-1 â€“ the most lopsided performance in a womenâ€™s gold medal match.

Williams let out a loud scream after match point, jumped up and down on the court and did a little victory dance that almost resembled a salsa.

Williams has now won 8 straight matches against silver medalist Sharapova, the only losses to the Russian coming in 2004 at the year-end championships and Wimbledon.

“I got the gold. I’m just so happy., ” Williams said. “I don’t know what to do. I’ve never played better. Playing against Maria you have to be at your best. I knew that. She won the French Open, she never loses this year. She’s playing the finals of everything so I knew it was going to be tough.”

No. 1 Victoria Azarenka of Belarus won the bronze medal with a 6-3, 6-4 win over Maria Kirilenko of Reussia. Williams’ win keeps Azarenka atop the rankings.