You are here: Home / Contributors / Montreal Welcomes Back its Legends 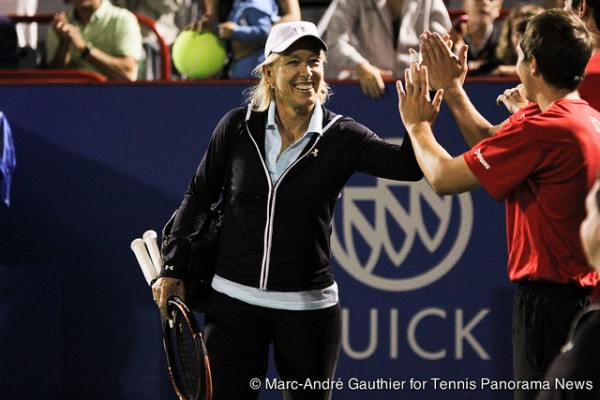 MONTREAL – On Monday night, the 2012 Womenâ€™s Rogers Cup in Montreal was launched with some impressive guests. In its annual Legends matches, now moved to the opening night for the first time, the local crowd cheered on Michael Chang, Jim Courier, Martina Hingis and Martina Navratilova as they exchanged groundstrokes and jokes at Uniprix Stadium.

While the four players received a large welcome, you could feel a sense of disappointment as Andre Agassi, the obvious star of the event, had to withdraw earlier this week due to a back injury. The American, always popular in Canada with his three titles in the 90s, had last been seen on this court in 2005 when he lost a close final to Rafael Nadal. â€œNo one is more disappointed than me and I promise you that I will be back the first opportunity I have!â€, Agassi mentioned in a statement.â€œ I want to extend my personal “best of luck” to one of the greatest tournaments in the world and some of tennis’ greatest fans!â€

His substitute, Michael Chang did a great job in amusing the crowd, mixing his impressive defensive game with punchy serves and comments.Â  The former French Open champion overpowered his fellow countryman Courier throughout their singles set, which he won 8-6. The two were then joined by Hingis and Navratilova in an entertaining mixed doubles match, which combined on the same court an impressive total of 79 Grand Slam trophies.

Courier and Hingis had previously just been introduced to the Rogers Cup Hall of Fame, which recognized their contribution to the Canadian event.Â  They joined their popular colleague Navratilova, as well as other tennis greats such as Agassi, Seles, Courier, Sanchez-Vicario and Connors. Hingis, winner of the Rogers Cup in 1999 and 2000, revealed that the Rogers Cup was one of her favorite stops on the tour. â€˜â€™It is an honor to be inducted in the Rogers Cup Hall of Fame!â€, she said in flawless French to the impressed crowd. â€œThis city loves its tennis and I always felt welcome in Montreal.â€

This night was the official start of this 2012 edition. Main draw matches will start on Tuesday morning, while the sixteen seeds will come in action starting Wednesday.
Charles David Mathieu-Poulin blogs for WtaQuebec www.wtaquebec.com, a website promoting local Quebec players. He is covering the Rogers Cup in Montreal for Tennis Panorama News. Follow him on twitter @earthstroke, follow his Montreal coverage on @TennnisNewsTPN.