You are here: Home / Contributors / Strong Field Clocks in for Montreal Rogers Cup 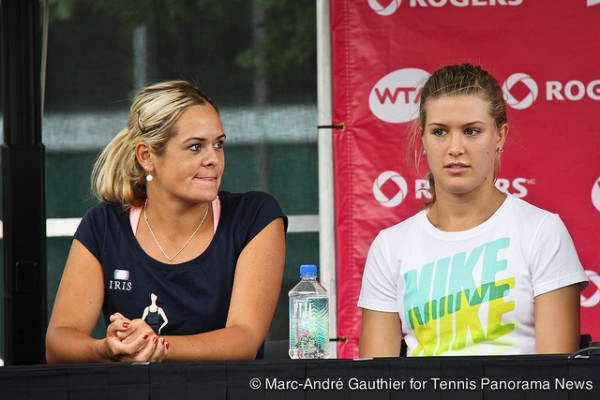 MONTREAL – While many were worried the Olympics would induce multiple withdrawals in the Rogers Cup main draw, 9 of the top 10 players will be present in Montreal. The only absentee, defending champion Serena Williams, had actually never signed up for the event played only a few days after her London triumph.

Earlier on Monday, the draw was made in downtown Montreal, in the presence of local hopes Aleksandra Wozniak and Eugenie Bouchard. Here is a short analysis of the different sections.

Victoria Azarenka stands at the top of the draw in an interesting half, which includes five former number ones. Her first match could be tricky against Goerges or Paszek, arguably two of the most dangerous floaters in the draw. Her third round against Lisicki could also be a thriller. In the quarterfinals, fifth seed Kvitova or ninth seed Bartoli, who both have had success against the Belarusian in the past, could pose a threat for the world number one. Coming off a strong showing at the Olympics with two medals, Azarenka will have to be ready from the get-go if she hopes to repeat (or improve) her semi-final showing of last year.

French Open winner and third seed Maria Sharapova highlights the second quarter: the Russian, who has just reached the finals of the London Olympics, has surprisingly never been further than the third round in Montreal. Former number one Jelena Jankovic stands in her way to the quarterfinals, but the Serbian is struggling in 2012: her second round against Daniela Hantuchova or Canadian star Aleksandra Wozniak could prove to continue her downfall. Caroline Wozniacki, winner in Canada two years ago, could await Sharapova in the quarterfinals, but watch out for Cilbulkova, Petrova or Pavlyuchenkova, who can all hit through the Dane.

Last yearâ€™s finalist Australian Samantha Stosur will be happy to get back on hard courts after a difficult grass season: her third round match against Safarova will feature some great athleticism and hard-hitting, but the most intriguing match-up will be in the quarterfinals against either Kerber or Ivanovic. While the Serbian has a lot to prove in Montreal after the 2010 controversy (the tournament denied the 2006 winner of a wild-card), Kerber comes in after a strong and consistent year. Watch out for the German to keep up her impressive play and make the most of a weaker bottom half.

Agnieszka Radwanska is coming in the Rogers Cup after her disappointing Olympics, but the Wimbledon finalist has a perfect draw to find back her solid 2012 form. Her subsection seems pretty open and Canadian Stephanie Dubois, who reached the third round in Montreal in 2006 and 2008, could well be her opponent in that same stage. A bit higher up the draw, Chinese Na Li or French Open finalist Errani should emerge to the quarterfinals, but all eyes will be on Eugenie Bouchard, a local WC and the recent Junior Wimbledon champion.
Main Draw actions starts on Tuesday, with Dubois, Wozniak, Hantuchova, Wickmayer and Goerges all featured on Center Court.