You are here: Home / Contributors / Canadians Featured on Tuesday at Rogers Cup in Toronto 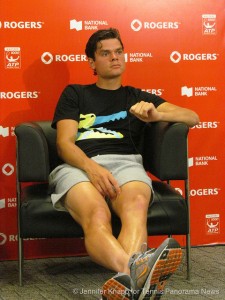 TORONTO – Tuesday featured the start of the main draw at Rogers Cup, as well as many featured first round matches. Canadians Frank Dancevic and Vasek Pospisil started and ended the day session. It was nothing but tough losses for both, however.

Dancevic started action on centre court against Kazakh Mikhail Kukushkin. The Canadian had his chances, but bowed out in straight sets, 6-3, 7-5. “As professionals we don’t really get the opportunity to play at home. We get this opportunity once a year as Canadians. I love it. It’s great. It’s unfortunate that I wasn’t playing really good today. I felt like if I was at the top of my game I could have maybe won today or done a little bit better here.”

“I’ve had a pretty rough year this year battling injuries and stuff. My confidence this year started getting better last week. Like I started playing really well and I made the semifinals of Vancouver.” “Then I just found that arriving here late and adjusting, I found it a little difficult… so going out today I didn’t have the best confidence.”

To start the night session was the Canadian favorite for the week, Milos Raonic. He took his break opportunities and served well to beat Serbian and doubles partner Viktor Troicki 6-3, 6-4.

Despite this being his home town tournament, and with the expectations of a country on his shoulder, he was confident and dealt with the pressure wonderfully. “I don’t think there was really too much nerves… sort of came out and was pretty fluid and relaxed throughout the match from the beginning to the end.” The Canadian emphasized that this was far from a nervous beginning. “I don’t think the whole – just getting this match out of the way. I don’t think of it that way, as a relief.”

Raonic could be faced with the difficult task of playing recent gold medalist Andy Murray, who arrived on Tuesday and was out practicing while Raonic won his match. “I played him earlier this year. I know if I play well I’ll have my opportunities.”

The Canadian continues to emphasize his drive for improvement in all aspects of his game. He also hinted that improving his return game would reap the most rewards for his game. “Being able to get out of the defensive on the return games into an aggressive position a bit quicker. That’s the thing that would probably make the biggest difference in my results.”

Elsewhere, Fish, Querrey, Haas, Stepanek, Granollers, Youzhny, Benneteau all won. And in the most dramatic match of the day, Fognini outlasted Lu, 7-6(7), 5-7, 7-6(5) in nearly three hours on a packed Court 1.

Wednesday will feature del Potro, Tsonga, Murray and Djokovic on the centre court in Toronto, as seeds begin their second round matches.