You are here: Home / Contributors / Mixed feelings for local hopefuls in Montreal 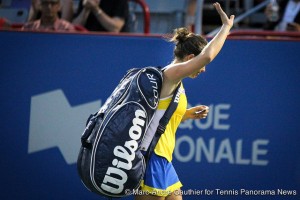 MONTREAL – While this Tuesday night started on a high note, it ended on mixed feelings for the Montreal crowd as they saw wild cards Stephanie Dubois and Aleksandra Wozniak playing back-to-back on a night featuring local talent. While Dubois started strong but couldnâ€™t keep up the pace against a higher ranked opponent, Wozniak scraped through a close two-setter against Daniela Hantuchova to secure some Canadian presence in the second round.

Dubois was first on court and she came out strong off the block, dominating the rallies and outhitting South African Chanelle Scheepers. After a mere 24 minutes, the player from Laval, Quebec was already up a set against an opponent ranked more than 100 spots higher on the WTA rankings, to the delight of the packed stadium.

After five consecutive breaks to start off the second set, Scheepers showed signs of revival as she altered her game to a more conservative defensive style. It paid off right away, forcing Dubois to a less effective attacking game plan. The Canuck felt the pressure, especially on her serve, which she didnâ€™t win in four attempts. On her side, the 41st ranked player held twice in the set to force a third.

The first game of the last set confirmed the momentum change: after multiple deuces, Scheepers broke Dubois to win her fifth game in a row. An important feat, as confirmed by the Canadian: â€˜â€™I was indecisive on a few shots and obviously winning this game would have changed the rhythm of the matchâ€™â€™, Dubois later analyzed. Despite loud cheers from the crowd at Uniprix Stadium, the flow of games kept on going for Scheepers, getting through the second round with aÂ  1-6 6-3 6-0 win. Fourteenth seed Pennetta now awaits the South African: it will be the first meeting between the two players.

Aleksandra Wozniak then came on court hoping to avenge her fellow countrywomanâ€™s defeat, but Daniela Hantuchova had other plans in mind as she quickly got up a break on Canadaâ€™s best ranked player. With great depth, especially on the backhand, Wozniak slowly built her way back in the match, even breaking for a 5-4 lead. While she couldnâ€™t use this chance to serve out the set, the second one at 6-5 proved to be too much for the Slovakian, who couldnâ€™t keep her unforced error tally down.

The second set followed a similar path: Hantuchova got the early break, only to see Wozniak get back in the match with some aggressive play. Serving for the match at 5-4, the Canadian showed her first signs of nerves and let her opponent back with a string of errors. For the second set in a row, Hantuchova couldnâ€™t hold at 5-all, giving Wozniak a second look at closing out the match. Despite holding two match points, some shaky forehands prevented the local favorite from ending this close battle. As if this match wasnâ€™t tense enough, a dramatic turn of events saw a sudden shower stop play on Center Court at the start of the tiebreak.

While many thought play was done for the night, a few courageous spectators saw the athletes walk back to the dried out court an hour later, at around 10:45, to conclude this match. Twelve points later, at exactly eleven oâ€™clock, Wozniak raised her arms in relief as she confirmed her spot in the second round in an exhausting and thrilling 7-5 7-6(5) win. Next up for the Canadian is Jelena Jankovic, in a repeat of the 2008 second round which saw the Serbian victorious in two sets.

Roberta Vinci, Tamira Paszek, Ekaterina Makarova and Sesil Karatantcheva were also noticeable winners of this first day: the Kazakh was especially impressive in a dominant 6-0 6-0 win over Romaniaâ€™s Sorana Cirstea. While first rounds will be completed, wednesday will also see the start of last yearâ€™s finalist Samantha Stosur, as well as Petra Kvitova, Sara Errani and youngster Eugenie Bouchard.