You are here: Home / Features / Del Potro and Tsonga Upset in Toronto 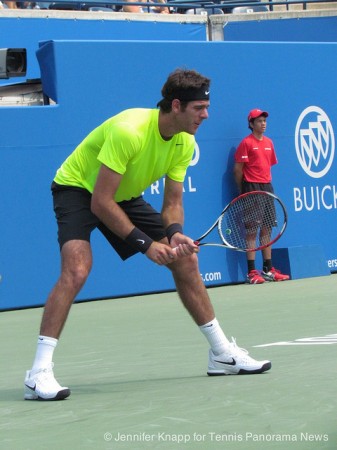 TORONTO – It was a star studded day at Rogers Cup in Toronto as several big names finally got under way. Bronze, silver and gold medalists highlighted centre court after a quick turn around from the 2012 London games.

Unfortunately, the turn around might have been two quick for singles bronze medalist Juan Martin del Potro and doubles silver medalist Jo-Wilfried Tsonga who bowed out one after another under the blazing Toronto sun.

First up was del Potro who took on the ever energetic Radek Stepanek. The Argentine struggled to find a rhythm early, and was broken in the opening match of the game. Even after del Potro battled to break back, he was broken immediately and Stepanek served out the first set with three aces, 6-4.

There was a similar story in the second set. Del Potro appeared to be gaining his rhythm, but was immediately broken after breaking Stepanek on two separate occasions. Stepanek then finally took the match in the second set tiebreak.

“I came here Monday night. Many players pull out from here. It’s not easy [to] play after big effort in Olympics, but I tried anyway. Now I need time to recovery my body if I want to stay healthy.”

Del Potro pulled out of his doubles match later in the day with the very same Radek Stepanek, but was unsure on whether or not he would go to Cincinnati “I wish to play there, but I need time to relax.”

It was a similar situation for Tsonga, who played a marathon match in London against Raonic in singles and won the silver medal with partner Michael Llodra. He fell 6-4, 7-6 to fellow Frenchman Jeremy Chardy who utilized an effective serve to stay perfect on serve. Regardless, Tsonga was still upbeat after his loss.

“I’m disappointed because I lost. But, you know, this is the rule… for me it’s a mandatory tournament; I have to be here.”

The quick turn around clearly took it’s toll on Tsonga who played a remarkable amount of tennis last week. “I didn’t have enough energy to move well. That’s it… I mean, I just played 287 games last week and I took the plane.”

Asked whether or not he looks at his medal every day, Tsonga could only smile. “Every day.”

Jeremy Chardy will play Marcel Granollers in the third round, and Stepanek will play the winner of Simon and Haas.