You are here: Home / Features / Djokovic glides past Tomic in Toronto 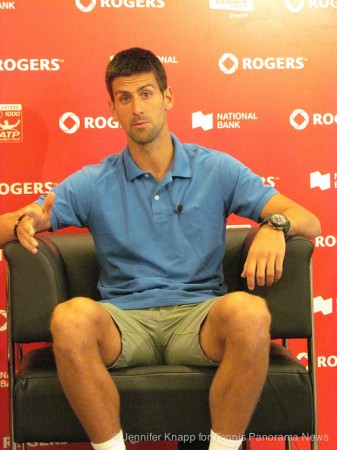 TORONTO – In a day that saw four of the biggest names in men’s tennis battle it out in Toronto, only the fourth would produce a truly convincing win.

Defending Rogers Cup champion Novak Djokovic took out Australian youngster Bernard Tomic in straight sets, 6-2, 6-3. Tomic played well in the first set, but was broken and struggled to dictate against Djokovic’s excellent defense. “He played well in the opening five, six games, but then he dropped the level a little bit. I used my opportunity.”

With del Potro and Tsonga losing, and Murray looking incredibly tired, Djokovic seemed relatively refreshed and relaxed. “I had the shortest flight,” Djokovic joked. “I’ve tried my best after ending Olympic Games in those two, three days as much as I could to get ready for hard courts.” During the match he tracked down a lob with a between the legs shot and went on to win the point, followed by a massive cheer that had the crowd roaring.

With hard courts being his favorite surface, the adjustment from grass to hard seemed effortless for the Serb, and the unorthodox style of Tomic played into his hand. He was able to sit back and play patiently in points, and then take the opportunities when they arose. “I love playing on hard court. It’s my favorite surface. Obviously when I needed to play well and be patient, I’ve done that really well today… naturally it takes a couple days at least for you to really get into the right form.”

Being familiar with Tomic also helped, as the two know each other quite well, and have practiced many times. “We know each other’s game. He’s very talented and has a lot of variety in his game and a lot of shots that are unorthodox… he has a lot of potential.”

Djokovic will take on Sam Querrey in the next round. Querrey beat Kei Nishikori in straight sets on the Grandstand.