You are here: Home / Contributors / Montreal Quotes of the Day â€“ “Genie” in a bottle 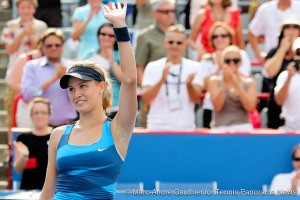 MONTREAL – The name Eugenie Bouchard has been on everyoneâ€™s lips in the past month. The 18-year-old from Montreal is on a successful streak, winning 20 of her last 21 matches, including her Wimbledon Junior title and her first WTA quarterfinal in Washington. With an entire nation watching, â€˜Genieâ€™ Bouchard kept up her impressive play of the past few weeks by winning her first round at the Rogers Cup against a more experienced opponent, Israelâ€™s Shahar Peer, in three tough sets.

Here are some of the best quotes of her news conference on Wednesday.

On the pressure of being Canadaâ€™s next tennis star: “I donâ€™t think about it. I put a lot of pressure on myself and itâ€™s the only one that counts.â€™â€™

Is she surprised of her recent successes? â€˜â€™I always believed in myself. Itâ€™s amazing to have such wins but Iâ€™m not surprised. I know I have the level to do it, and even more. Itâ€™s all about hard work.â€™â€™

About the crowd: â€˜â€™They were very loud. They applauded her double faults, even when she was missing first serves!Â  They were so loud my ears were hurting at times! It was unbelievable.â€™â€™

About playing Na Li in the second round: â€˜â€™Iâ€™ll go in there without any pressure. I know I can play well, and I know I can win if I play my best.â€™â€™

While this tournament saw the emergence of a new star, it also is the last Montreal Rogers Cup for a well-respected champion. After a tough doubles loss today, Marie-Eve Pelletier met the Montreal press probably for one last time…

When reminded about her first time in Montreal: â€˜â€™It was about 15 years ago I think. Itâ€™s odd to think I was there such a long time ago. When you are a high-level athlete, what you like is not only play for the crowd but also for your friends and family.â€™â€™

On why she is retiring, despite her recent good results: â€˜â€™Tennis is so tough mentally. Itâ€™s easy to look back and want to do things differently. I love to compete, but itâ€™s the rest, like the traveling, that makes it difficult.â€™â€™

On recently focusing on doubles: â€˜â€™I just loved doubles and was doing well. But I recently had the goal to play one more Grand Slam in singles, which I achieved as Iâ€™ll be at the US Open.â€™â€™
On what is awaiting her: â€˜â€™I have more challenges ahead of me. I would like to stay in the tennis world, help younger players maybe. Anything that would keep me close to the courts!â€™â€™