You are here: Home / Features / Dramatic day in Montreal 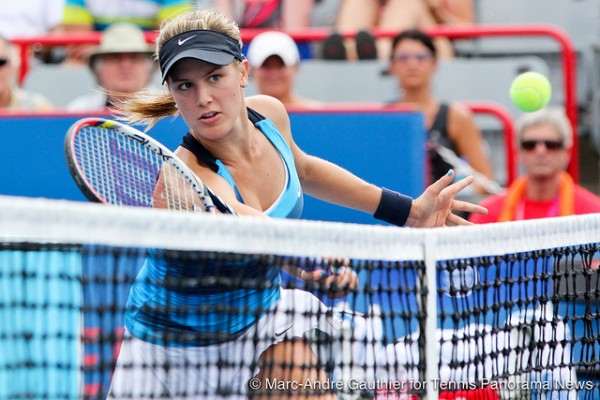 MONTREAL – Five seeds and local star Eugenie Bouchard were in action on Wednesday at the Rogers Cup, but no one expected so many dramatic twists and turns on this hot and humid day in Montreal. While Sara Errani, Lucie Safarova, Varvara Lepchenko and Shuai Peng had routine two set wins, many players had to go to distance in those difficult conditions.

It was the case for Petra Kvitova, who had been quite clear in her pre-tournament interview: outdoor hardcourts arenâ€™t her favorite surface, especially those of North America. It showed as the 2011 Wimbledon champion dug deep against Kazakh Ksenia Pervak in the first night match. With the help of a well-timed rain delay, as well as mistimed double faults from Pervak, the Czech ended a winner in a long and tedious 4-6 7-6(0) 6-0 battle.

And this was only the peak of the iceberg as such drama happened all around the grounds all day long. Indeed, Mona Barthel, Christina McHale and Kiki Bertens all fought hard to get through in three long sets: the Dutch qualifier was especially impressive as she upset two-time quarterfinalist Nadia Petrova in 2 hours and 20 minutes. At night, Flavia Pennetta seemed poised for a quick win against Chanelle Scheepers, but she unexpectedly had to withdraw with a right wrist injury while being up 4-1 in the first set. Same happened to Simona Halep, retiring down 5-7 4-4 to Australian Samantha Stosur: the Romanian had led 5-1 in the first with three set points, as well as 4-2 in the second.

But the story of the day goes to wild card Eugenie Bouchard, who was facing experienced Israeli Shahar Peer on Center Court. Playing in her second Rogers Cup main draw, the Canadian looked in control of her nerves at the start of the match as she stormed to a quick 2-0 lead. But she couldnâ€™t keep her level up, as Peer stayed consistent and rallied back to take the first 6-3. But Bouchard kept on being aggressive and the pressure finally paid off in the second set: breaking her opponent four times, she forced a third set, creating a large wave of applause from the partisan crowd.

With both players playing solid tennis, this close contest went to distance. While Peer seemed more aggravated throughout the set, she managed to stay in the match until five all, where she even got two break chances. But Bouchard confidently won the next four points with clutch serving, taking a 6-5 lead. To the crowdâ€™s delight, eight points later and after saving another game point, the Canadian saw Peer net a backhand and threw her arms up in the air, winning her first ever Rogers Cup match in over two hours. Next up for the local phenom is 10th seed Na Li, in a blockbuster second round match-up.
All second round matches will be completed on Thursday, with top two seeds Victoria Azarenka and Agnieszka Radwanska playing their first match in Montreal. Also playing are Ana Ivanovic, Marion Bartoli, Caroline Wozniacki, Angelique Kerber and Jelena Jankovic, who will start her 2012 campaign against Canadaâ€™s best ranked player Aleksandra Wozniak.