You are here: Home / Features / Tough afternoon for the seeds in Montreal 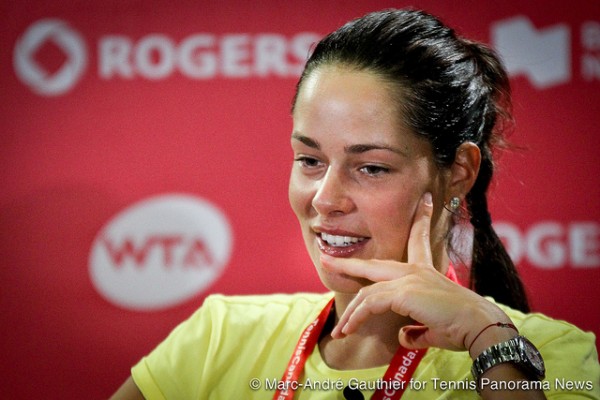 MONTREAL – While six seeds were in action in this rainy day at the Rogers Cup, only ninth seed Marion Bartoli booked her place in the third round so far. Hoping to join the Frenchwoman are Agnieszka Radwanska and Dominika Cibulkova, whose matches were interrupted by rain late in the afternoon. For Sabine Lisicki, Jelena Jankovic and Ana Ivanovic, their Montreal campaign ended early as they were upset in their first match of the tournament.

Two years ago, Ana Ivanovic was in the middle of a media controversy in Montreal: denied a main draw wildcard which she needed due to a dramatic drop in the rankings, the 2006 winner had clearly stated her discontent at the Rogers Cup organizers. When the order of play was released yesterday, it felt like the story would finally be forgotten: Ivanovic was preferred to Wozniacki or Radwanska to open the day session on Center Court, in an obvious redemption from the Montreal staff. But a shocking 6-0 6-0 loss from the Serb to Italian Roberta Vinci just added fuel to the fire.

Ivanovic looked off right away, making numerous unforced errors. On the opposite side of the net, Vinci stayed consistent and varied her shots well, especially using her very effective slice. The Italian never let Ivanovic in the match, not allowing a single break point to the Serb. In the end, the match lasted 44 minutes and Ivanovic won only 21 points, losing for the second straight year to Vinci in Canada. While obviously upset after her loss, Ivanovic was still playful in her press conference: referring to the two â€˜wheelsâ€™ she just received, she even joked about â€˜â€™going back home on a bikeâ€™â€™.

Maybe she can give a ride to her fellow countrywoman Jelena Jankovic, whose 2012 struggles continued against Canadian Aleksandra Wozniak. Despite starting the match with two consecutive forehand winners, the former number one couldnâ€™t find her rhythm as Wozniak kept hitting deep and hard from both sides. Despite losing her four previous meeting against Jankovic, the local wildcard seemed confident from the get-go, easily winning the first set 6-2. While the Serb showed signs of greater form after the rain delay late in the second set, it was too little too late as Wozniak closed out the match to reach the Rogers Cup third round for the first time of her career.

For German Sabine Lisicki, things turned painful on Court 9 as she got injured while being up 4-2 in her third set to Spainâ€™s Carla Suarez Navarro. Despite fighting through the pain, the fifteenth seed lost the last four games of the match, making Suarez Navarro a surprising guest in the third round. Other action saw second seed Radwanska struggle against German Mona Barthel: the rain interrupted their match at 2-2 in the third set. Moreover, Varvara Lepchenko was only one game away from upsetting Dominika Cibulkova, but the American was stopped by a rain shower while serving for the match at 6-4 5-4. Also on court were unseeded Voskoboeva and McHale in a close third set.