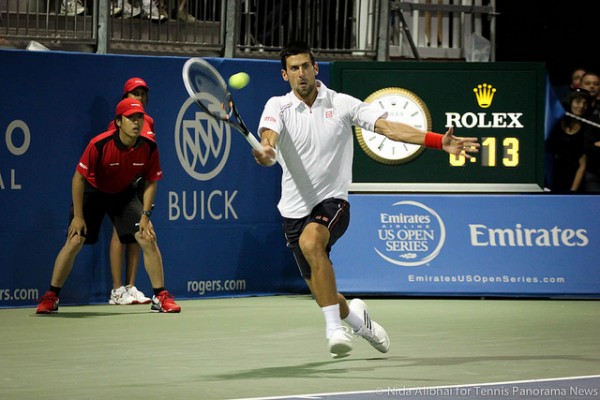 TORONTO – After a rain filled day that failed to see a single minute of tennis played, Friday was bound to be an eventful day at the Toronto Rogers Cup. After several matches were delayed, another considerable rain delay pushed play back and created an eventful evening for Canadian fans.

All of the dayâ€™s winners were required to play twice, including Richard Gasquet. The Frenchman defeated Tomas Berdych on the stadium court before the rain struck, along with his opponent Mardy Fish who defeated Monaco earlier in the day. It made for a long day that included a difficult night match on the main stadium. “For sure, it’s tough, but I think he (Fish) played one more hour than me in morning with Monaco so it made a little bit difference, I think.” “I’m in semifinal. I’m feeling confident, so I’m sure I can win.”

Likewise, Janko Tipsarevic defeated Marin Cilic in convincing fashion, 6-2, 6-4, and was called upon to defeat Spaniard Marcel Granollers to start the night session at the grandstand, 6-4, 6-4. Despite the long day, Tipsarevic was incredibly efficient only having to spend two hours and 51 minutes of time on court between two matches. The Serbian has made the Rogers Cup semifinals for the second year in a row, falling to Mardy Fish in the semifinals of last year’s Montreal edition.

Perhaps the most difficult task of the day belonged to Novak Djokovic. Due to the quick match on centre court, he was able to get to 6-4, 3-2 30-30 before play was called. Play once again resumed after the rain delay and he was able to defeat Querrey 6-4, 6-4. His day was not done there as he needed to defeat Tommy Haas on the second match on the Grandstand starting at 9pm local time; a total of three different starts after long breaks. He followed through and will play compatriot Tipsarevic.

Lastly, hometown favorite Milos Raonic was upset by John Isner, who like all other semifinalists, needed to win two matches in the day to advance. His day started with a two hour defeat of Philipp Kohlschreiber, 6-7, 6-4, 6-4. “I felt all right out there, and I thought I would feel fine. The way I looked at it is I was at a bit of an advantage, in my opinion, because he hadn’t played in a few days.”

The second set saw Raonic go up a break, but immediately gift it back to Isner, and the set went to a tiebreak. Despite the crowds best efforts to cheer on the hometown favorite, Isner took the set and was the better player in the second set. “Fortunately for me, he sort of let me back in that first set. The tiebreak was a coin flip and I won it really, so lady luck was on my side.”

Raonic noted his struggles serving were largely his undoing. “Everything was floating long. I wasn’t snapping hard enough… when he was able to get his racquet on it, he was able to put it in comfortably and also maybe create a little bit more.”

Saturday’s action will feature Richard Gasquet versus John Isner during the day and Novak Djokovic versus Tommy Haas at night.