You are here: Home / Features / Third round completed at the Rogers Cup in Montreal 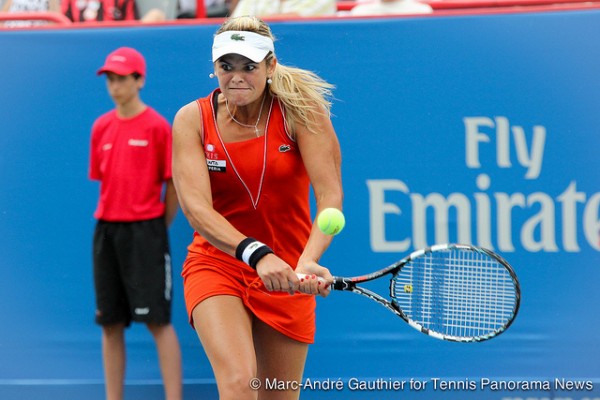 Montreal – While the showers interrupted play late in the afternoon for the third consecutive day, the quarterfinals were set as Agniezska Radwanska, Li Na, Caroline Wozniacki and Petra Kvitova notably advanced in Montreal. But it was local star Aleksandra Wozniak who stole the thunder as she got through in two sets over American Christina McHale.

In a match completed over two days, Wozniak became the first Canadian woman to reach the quarterfinals in over 20 years with her 7-6 6-3 win. Interestingly, it was Patricia Hy-Boulais who was last to achieve that feat and her husband, Yves Boulais, is now part of the Tennis Canada coaching team and thus advises Wozniak at times. â€˜â€™I’ve always come with my friends to watch the best players in the world play in this big tournamentâ€™â€™, Wozniak revealed. â€˜â€™This tournament means a lot to me and Iâ€™ll be ready to do my best in the quarterfinals tonightâ€™â€™.

She will have a tough task ahead against her nemesis and almost-homonym Caroline Wozniacki, against whom she has a 1-7 losing record. The Dane had to battle hard to get through Varvara Lepchenko, but prevailed 4-6 6-3 6-4 in over two and a half hours, right before the first drops hit Uniprix Stadium.

Also in the third round was Petra Kvitova, who had probably the toughest match of the higher seeds against Frenchwoman Marion Bartoli. But the Czech rose to the challenge and played one of her trademark flawless performances to advance with a very convincing 6-1 6-1 win. Kvitova never let Bartoli in the match by taking control early in the rallies and saving all three break chances she faced. She put herself up as the one to beat this week and will next face Austrian Tamira Paszek, who is bringing her grasscourt form to hardcourts in her second career quarterfinal appearance in Montreal.

Paszek is joined by Roberta Vinci as the only two unseeded players in the quarterfinals. After being on the brink of defeat in the first round against Wickmayer and handing out a double bagel to Ivanovic in her second match, the Italian stayed solid against sixth seed Angelique Kerber, winning 6-2 7-6(7). The final quarterfinal match will feature Chinese Na Li, who overpowered French Open finalist Sara Errani 6-4 6-2, and second seed Angieszka Radwanska, who kept her hopes of getting the number one ranking alive by defeating Chanelle Scheepers 6-2 6-4.