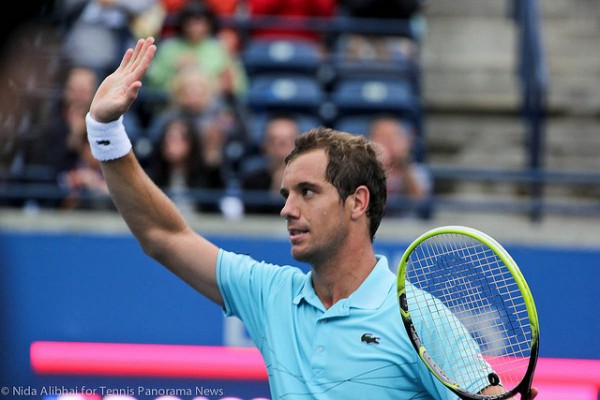 TORONTO – For the third straight day, the Toronto Rogers Cup was effected by rain. Luckily, the first semifinal of the day was able to get under way only 20 minutes later than scheduled, around 3:20 local time.

The conditions were cold and grey, and at times windy as rain threatened but never came. Conditions were slower, a big boost to Richard Gasquet, and John Isner played into his hand. “It was weird” said the 6’9″ American. “Get here and it’s pouring down rain when I arrived to the courts, and next thing you know it stops raining and you get 100 people out there and the courts are ready to go. Didn’t get to warmup for the match. “The first set saw 12 straight holds to force a tiebreak. In reality, the momentum of play had already been set. Gasquet was incredibly effective on serve, getting in 88% of his first serves and only dropping 4 points on serve all set. Isner was forced to play 43 points on serve and save two break points to force a tiebreaker.

Momentum in hand, Gasquet rose to the occasion, taking advantage of longer points and dictating with the backhand. “It’s world class,” Isner said of the Gasquet backhand. “It’s just a gift of his, really. It’s tough for me because I like to take the majority of my shots if I’m playing a righty to his backhand, and he was able to handle that pretty well.”

While Gasquet’s first serve percentage dropped in the second set, he continued to dominate. With the pressure still squarely on Isner, Gasquet finally broke and would cruise to victory, taking the second set and the match 7-6(3), 6-3, without facing a single break point all match. “The key of the match was to return well, and I did it. I tried to return all the time to make him play,” said the Frenchman.

“Then I like to defend. But of course I had to do a big tiebreak, and I did it. I played incredible in the tiebreak and then I felt [good].”

As for the final, Gasquet is not too worried about who his potential opponent will be. “That’s not a big problem for me to play against Novak or Janko. They are very , very good players both. Both are playing very, very [well].”