You are here: Home / Features / Djokovic Makes it Through the Rain and into the Rogers Cup Final 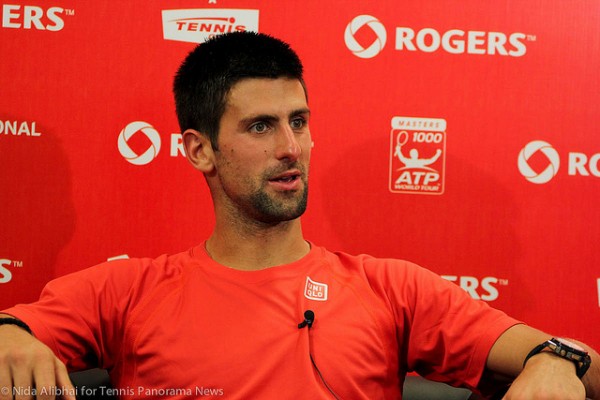 TORONTO – They tried to start. It rained. They stopped. The rain stopped, the players came out. They squeezed in five games, and it rained again. It stopped again, and the driers came out… it rained again. Even after the driers came out for the final time, it spitted slightly before ending, and the players would resume for the final time around,Â  It even started to spit for a short period, but it would eventually stop, and play would get under way around 10:25pm on a cold, blustery night in Toronto.

Novak Djokovic and Janko Tipsarevic aren’t just both Serbian, they’re good friends and good colleagues. They practice together often and know each other and each other’s games very well. “Weather is something you can’t effect, obviously. We were very close to cancelling the match tonight and playing tomorrow,” said Djokovic. Unsurprisingly, the delay did little to damage the level of play in the first set, and both players came out crushing the ball.

It would be important for Tipsarevic to use good depth to neutralize Djokovic’s able to create angles from the baseline and push him around. He did an excellent job in the first set, which saw nine straight holds. Unfortunately, the best game of the set would go against him, after several long rallies were created off his second serve, and Djokovic would break to take the opening set 6-4.

The momentum was clearly on Djokovic’s side, as he began to use the backhand down the line and dictate play, going up a quick break to earn 3-1. After another grinding game, Djokovic broke once again to go 5-1, and the match was all but over, finishing up 6-4, 6-1.

Despite winning, Djokovic was clearly frustrated with the stopping and strating due to the unpredictable rain. “I don’t see why hard court tournaments can’t have covers. I think this year’s tournament should strongly consider covers for next year.”