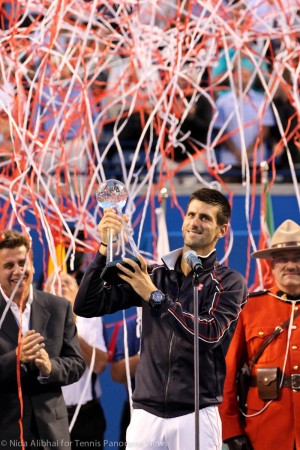 TORONTO – After a difficult rain soaked week, it was a perfect night for Novak Djokovic as he rolled to his third Rogers Cup title and his first in Toronto. He defeated Richard Gasquet, 6-3, 6-2, being nearly perfect on serve and dominating the pattern of play.

Gasquet had an early opportunity in the very first game of the match, where three sloppy errors from Djokovic gifted him three points. It would be the only opening he would have all night, as Djokovic would only drop one point on serve for the rest of the set, and a mere four points on serve in the second set, needing to save only one more break point to cruise to victory. “It was a tough match,” said Gasquet. “It’s a long time I didn’t play a final of this kind of tournament. It’s a big tournament. I felt a little bit more pressure. It’s tough when you have Djokovic in front of you and you are not playing your best tennis. He played much better than me for sure.” 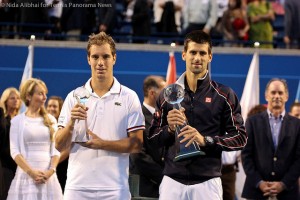 Backhand exchanges were key, and Djokovic often punished the shorter, looping Gasquet backhands. After a couple of excellent backhand down the line winners, the Frenchman struggled to find the shot and was unable to take advantage of the space he created for himself.

When asked on television when Djokovic knew he was playing well, he said it all “starts and ends with the legs.” Indeed, even though playing deep into last week forced withdrawals from top players such as Federer and Ferrer, and early round losses from players such as Tsonga and del Potro, Djokovic’s movement, strength and patterns of play stood the test of a depleted field as he was only broken once en route to the final.

For Djokovic, it is a massive confidence boost after a difficult Wimbledon, and returning to the same venue to lose twice in a row at the London Olympics. “The losses on Olympic Games were more difficult for me emotionally than Wimbledon, but I still played some great matches, played really good tournaments both on grass courts. The two losses that I had in three days in Olympics Games gave me even more desire to come here and perform my best and try to win a title.”

However, Djokovic would not deny that defending his points from his Rogers Cup title in Montreal last year was in his mind. “There is always pressure of defending your points if you win a tournament. That’s something that’s part of our points and ranking system, the way it works in our sport.”

“To be quite frank with you, I hope that we can make certain changes regarding that, because there is lots of pressure on the players, especially top players, of defending their points all the time and coming back over and over again. So hopefully we can a rule change in the future that will release us from that expectation.”

Djokovic has mentioned several times over the week that hard courts are his favorite surface, and he now has a tidy winning streak on the surface, having won the last major hard court tournament in Miami. “This is actually a huge confidence boost for me. I haven’t won a title since Miami and played lots of finals. This is a great hard court season start.”

Djokovic will now go to Cincinnati and then the US Open, where he will attempt to defend his title as well as win his fourth straight hard court grand slam tournament.

Brodie McPhee is the writer of mindtheracket.com. You can also follow him on Twitter at @MindTheRacket. He covered the Rogers Cup in Toronto for Tennis Panorama News.