You are here: Home / Front Page News / Mardy Fish – On the Way Back 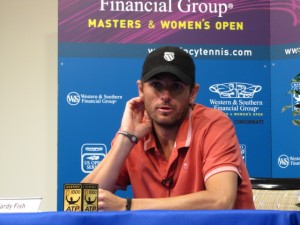 Mardy Fish revealed in MayÂ  that he had been suffering from a heart arrhythmia and that he underwent an electrophysiology procedure to “re-wire” his heart. Fish is playing the Western & Southern Open this week and spoke to media on Monday about his physical condition. Here are some excerpts from his news conference:

Q.Â  With respect to coming back this year, you about 75% or all the way back?

MARDY FISH:Â  No, my practices, I’ve tried to keep them as normal as possible.Â  You know, one of the things with trying to just get your fitness level back is you got to push it more and more.Â  That sometimes has been a little hard mentally.

But, you know, I mean, everything’s checked out okay.Â  Past few weeks have been good minus the ankle injury in Atlanta.

Couldn’t have asked for a better couple weeks after that considering I wasn’t able to move around for eight days or so to make sure that it was okay.Â  Couldn’t practice, couldn’t train at all, and that’s hard going into tournaments where you need fitness to rely on quite a bit.

So I couldn’t have asked for a better Washington D.C., to be honest.Â  And then any time you make quarterfinal in a Masters 1000 event is a pretty good result for almost everyone.

So it’s been good.Â  It was a good test on Friday to play two matches as well.Â  I was super tired in the third set of the second match, but these are all good problems to have.

Q.Â  Are you going to continue to play some more dubs with Mark Knowles?

MARDY FISH:Â  Yeah, we played last week.Â  I won’t play the rest of the summer, but it’s nice sometimes when you don’t get the matches that you can get out there before a match, before a singles match.

Conditions in Toronto are completely different than conditions here.Â  It’s been weird.Â  The weather has been strange the past few times we’ve gone, past few places we’ve gone.Â  The weather was terrible in Wimbledon; extremely hot in D.C.; really bad in Toronto with the rain and stuff; and now here.Â  It’s August 13th and it’s 72 degrees outside.Â  It’s a little strange right now.

So that’s been hard.Â  It’s been hard for most of the players to try to get used to.Â  You come here thinking of a certain type of weather and it’s the complete opposite and you got to get everything in line for that.

Q.Â  Talk about trying to get your conditioning back when you’re in the heart of the season.

MARDY FISH:Â  Yeah, I mean, that’s the hardest thing because you need matches.Â  You can train all you want on the practice court and things like that, but just can’t duplicate the actual matches.

Like I said earlier, I couldn’t have asked for a better couple weeks after what happened in Atlanta.

I mean, to be honest, my past few events since my health stuff have actually been relatively good:Â  Fourth round Wimbledon and semis in D.C.

Tommy Haas, I felt like I could have won that tournament, and he played a great match against me in the semifinals.Â  He’s playing great tennis.

So I haven’t put any shockers out there since I’ve been back, which has been a good thing.Â  I’ve been able to get on the court and play seven, eight matches in the past couple weeks that I didn’t think I was going to be able to get.

That’s the hard part coming in.Â  Twelve months ago I was extremely fit, extremely confident.Â  Sort of the opposite sort of fitnessâ€‘wise here, and usually the weather is just brutal here and you need to rely on that a lot.

I was able to do that last year throughout the summer, but maybe we won’t even need to with the weather like it is now.

Q.Â  Do you think the Open is the toughest slam physically and mentally?

MARDY FISH:Â  I think probably the French Open would be the toughest physically.Â  Mentally I definitely put it up there just with sort of the surroundings and what you have to sort of put behind you.

It seems like every year you get one or two days where you got to get pushed back and pushed around with the weather and the rain and stuff.Â  You have to deal with going back and forth from Manhattan and sort of the traffic concerns and things like that.

So there is a lot that goes on on the side.Â  The week before is always so hectic.Â  You’re trying to sort of meet every sponsor’s visit that you have and shake everyone’s hand that you promised to shake at the beginning of the year.Â  Seems like it always happens during that week.Â  That makes it hard leading up to the biggest tournament of the year for us.

That’s probably one of the most satisfying ones to do well at.Â  I think physically probably the French would be harder than that.