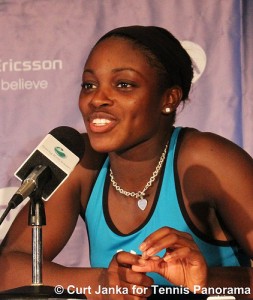 NEW HAVEN, Conn., August 15, 2012 â€“Â  Sloane Stephens has moved into the main draw after a withdrawal by another player due to injury, and fellow American Bethanie Mattek-Sands has been granted a wildcard into the main draw of the 2012 New Haven Open at Yale presented by First Niagara, a WTA event that is part of the Emirates Airline US Open Series to be held August 17-25, 2012 at the Connecticut Tennis Center, it was announced today by Tournament Director Anne Worcester.

Due to the withdrawal of Kaia Kanepi (Achilles injury), Stephens moves into the New Haven Open main draw and will be the third-highest ranked American in the field. The 19-year-old from Florida has had a breakout year in 2012, reaching the fourth round of the French Open and the third round at Wimbledon. She currently sits at her career-high ranking of No. 49 in the world. This will be Stephensâ€™ first appearance in the main draw of the New Haven Open.

Mattek-Sands, the â€œLady Gaga of Tennis,â€ is known for her audacious outfits and exciting tennis game. The American reached the 2010 New Haven Open round of 16 as a qualifier and achieved a career-high ranking of No. 30 in the world in July 2011. On the doubles court, she owns 10 career WTA titles as well as the 2012 Australian Open mixed doubles title with Horia Tecau.

In addition, four other Americans were granted wildcards into the New Haven Open qualifying tournament, including reigning NCAA singles and doubles champion Nicole Gibbs; University of Florida standout Lauren Embree, who helped her school capture the NCAA team championship this year; 2011 Orange Bowl semifinalist and 17-year-old Sachia Vickery; and Lena Litvak, who received an automatic wildcard with her victory at the Yale Summer Championships.

â€œSloane has had an amazing year thus far and Bethanie is always a fan-favorite,â€ said Worcester. â€œWeâ€™re looking forward to having these two American stars compete in the main draw of the New Haven Open. Our four American Qualifying Wild Cards – Nicole, Lauren, Sachia and Lena – all have a great opportunity to continue in the legacy of qualifiers doing extremely well at the tournament. Any one of them could make a run to the finals, just as qualifiers such as Agnes Szavay and Petra Cetkovska did in 2007 and 2011, respectively.â€