You are here: Home / Events / Petkovic helps to unveil refurbished McClain Park court ahead of participation in New Haven 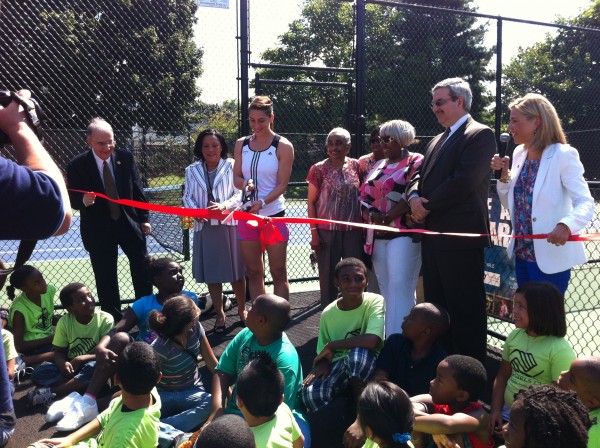 The refurbished courts are part of the Fresh Courts program, which was introduced in 2010 by American Express and the United States Tennis Association and designed to support local tennis in communities across the U.S.

Local dignitaries including Connecticut State Senators Martin Looney and Toni Harp and New Haven Aldermen Jorge Perez and Andrea Jackson-Brooks were on hand to unveil the courts as was former top-10 ranked WTA star Andrea Petkovic, who hosted a free clinic for local youth from the New Haven Boysâ€™ and Girlsâ€™ Club. McClain Park was chosen for the renovations due in part to its close proximity to seven schools in and around the Hill Section of New Haven.

Truman School, which is across the street from McClain Park, has already partnered with the New Haven Open and Yale Athletics to create an after-school program called TEaM (Tennis, Education and Mentoring). The newly refurbished and age-appropriate courts at McClain will give these local youth a chance to practice tennis in between sessions at Yaleâ€™s Cullman-Heyman indoor courts.

â€œTodayâ€™s announcement is about more than tennis courts,â€ said New Haven Mayor John DeStefano. â€œIt is about providing safe and healthy opportunities and access to positive role models for our youth. Thank you to the New Haven Open for your longstanding commitment to New Haven both on and off the courts, and thank you to American Express for supporting this important effort.â€

â€œWe applaud American Express for investing in the refurbishing of McClain Park as part of its national Fresh Courts program to support tennis in local communities.â€ said Anne Worcester, New Haven Open Tournament Director. â€œHaving Andrea Petkovic host a clinic for neighborhood youth is a great way to illustrate how these newly refurbished courts will transform the Hill Section and make possible all kinds of future tennis programs.â€

Petkovic will be participating in next weekâ€™s New Haven Open, making a comeback to the courts after injuries derailed much of her 2012 season. In 2011, Petkovic was the only player to reach the quarterfinals of three of the four Grand Slams, achieving a career-high ranking of No. 9 in the world in October. She has not played a professional match since April due to her injuries, but will be on-court in New Haven to reclaim her spot in the top of the WTA.